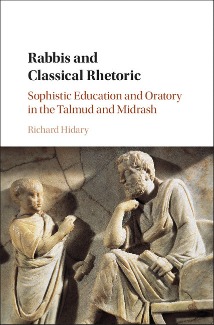 Rabbis and Classical Rhetoric: Sophistic Education and Oratory in the Talmud and Midrash, by Dr. Richard Hidary, associate professor of Jewish history, is coming out this month from Cambridge University Press. Intended as both a class textbook and for general readers interested in issues of truth in this modern age, it examines the influence of classical rhetoric on Talmudic rabbis of the Greco-Roman period.

According to Hidary these rabbis are remarkable in that they positioned themselves between philosophers, who boasted knowledge of objective reality, and sophists, who could debate both sides of any issue. “Training in rhetoric—the art of persuasion—formed the basis of education in the Roman Empire,” explained Hidary, a 2017 Harry Starr Fellow at the Center for Jewish Studies at Harvard University. “This book argues that the rabbis succeeded in navigating a novel path between Platonic truth and rhetorical relativism by discovering a notion of multiple truths embedded within each word of divine Scripture.”

Their approach is relevant today as modern culture struggles to reconcile truth in the face of advanced scientific research in fields such as quantum physics and ongoing philosophical arguments such as postmodernism. “It is fascinating to view these modern debates on the background of very similar ancient views,” said Hidary, “and even more satisfying to find that the Talmudic rabbis advanced a complex and nuanced middle position that can serve as a model for modern thinkers.”

Hidary has long been curious about how these scholars were able to incorporate their faith into a method of reason. “I’ve always been fascinated by Talmudic debate and its penchant for arguing both sides of every issue,” he said. “It seems at odds with a religious biblical-based tradition to give so much room for intellectual questioning; yet for the rabbis, the art of argumentation is elevated to a form of religious worship. The rabbis succeeded in adopting rhetorical reason, a potential threat to received religion, and incorporating it as an integral part of their own spiritual life.”

“While researching my dissertation,” he explained, “I came across a Talmudic pericope [excerpt] that was structured just like a five-paragraph essay I learned about in a writing class. I pursued this parallel further only to discover that both the Talmudic and modern forms trace back to classical rhetoric. This insight opened for me a whole new perspective on the wider intellectual world within which the rabbis worked and that informs so many aspects of their literature.”

While Rabbis and Classical Rhetoric is being marketed by Cambridge for classroom use, Hidary believes it might also appeal to a broader, intellectually curious audience. “I hope this book will be used in courses in areas of Jewish history of the classical period, Talmud and midrash. It contains sections that unpack the forms and goals of each major work of Hazal [the Sages], including Mishnha, Midrash Halacha, Talmud Yerushalmi, Talmud Bavli, and Midrash Aggadah. It can therefore help both beginners and advanced students contextualize these great compilations that anchor the Jewish tradition within their cultural surroundings.”

“This will [also] be of interest to modern readers,” he added, “who grapple with issues of truth, interpretation and subjectivity—especially in light of postmodernism—and the book will provide them with historical background to compare ancient and modern approaches. It will also help readers interested in the Roman Empire to appreciate how minorities in the Greek East experienced the dominant culture. Even for longtime students of Talmud, it can provide the reader with a context in which to understand features of Talmudic structure and argumentation that may seem strange to a modern sensibility.”

In addition to his new book, Hidary’s article, “A Tale of Two or Three Witnesses: Oral Testimony in Greco-Roman, Qumranic and Rabbinic Court Procedure” will be included in a forthcoming Festschrift in honor of Dr. Lawrence Schiffman to be published by Brill.

In the coming spring 2018 semester Hidary will be teaching a course at The Bernard Revel Graduate School of Jewish Studies called, “Truth, Justice and Court Procedure in Masekhet Sanhedrin, Compared to Roman and Modern Law.”