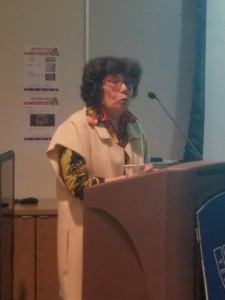 On Dec. 4, 2017 the Humanities and Jewish Studies Faculty Colloquia of Yeshiva College and Stern College for Women and Bernard Revel Graduate School hosted a presentation titled “Deliverance Denied: A Jewish-Christian Artistic Exchange about Isaac’s Sacrifice.” Prof. Yael Feldman of NYU Skriball Department of Hebrew and Judaic Studies spoke about the different artistic interpretations of akedat Yitzchak, and how they changed with time. She first presented two main Christian approaches. The first was a positive depiction, glorifying the idea of sacrifice as Avraham giving himself to a greater purpose. The second was negative, as representing a darker moment in Avraham’s life. Prof. Feldman then explained the akeda as portrayed by Israeli artists, and how its portrayal shifted over time from tenderness to aggression. Before the establishment of the state of Israel, the akeda was glorified in Israeli art, referred to as “osher ha-akeda” (the joy/happiness of the akeda). This approach reflected the mission of the pioneers who came to the land of Israel, willing to sacrifice all they had in hopes of building a Jewish homeland. However, over time, there was a shift in this positive energy, which influenced a shift in the depiction of the akeda in Israeli art and literature. Particularly in the 1970s and 1980s, Israel went through a period of wars and suffered many casualties. It became harder for the people of Israel to glorify the idea of sacrifice after watching their children fall in battle, leaving behind grief-stricken parents, children, and spouses. The people of Israel understood the brutality of war, and this can be seen in the Israeli artistic interpretation of the akeda increasingly rendering a darker depiction of the Biblical event, also known as “Pachad Yitzchak” (the fear of Issac). The akeda is no longer portrayed as the epitome of submission to a higher authority, but rather a gory event that took place in the history of our forefathers. It was fascinating to see the clear shift in artistic interpretations of the akeda and to understand it through the context of war and Israeli sacrifice.