Gabriel Wasserman is Awarded a Prestigious Fellowship On Fragmentary Judaism: The Approach of R. Aharon Lichtenstein towards Nonobservant Jews

On February 13, 2018 · In Faculty, Student and Alumni Profiles, Lectures and Activities, News 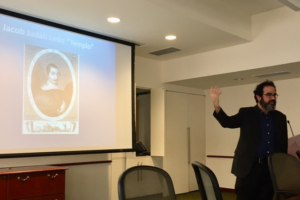 After the Inquisition became active in Portugal in the 1540’s, many conversos left to disparate locations in order to openly embrace Judaism. Dr. Perelis explained briefly the style of the synagogues that they erected in their new homes. In Amsterdam, the focal points of the synagogue were the central Teivah (Bimah, the raised platform from which the Torah is read and services led) and the Heichal (Aron, the ark where the Torah Scrolls are stored) at the front of the synagogue. The 1675 Amsterdam synagogue, or esnoga, was an impressive, almost ostentatious, building. This was in contrast to the synagogues in Europe which were kept modest (or hidden). The community embraced the image of the phoenix born from ashes to symbolize their community’s experience of being reborn out of the persecution and auto-da-fes of the inquisitions. The synagogue also included external sloping arches and columns meant to evoke the Temple of Solomon. Dr. Perelis also showed how some of these themes emerged in the synagogues of this diasporic network in London, Recife, Curacao, Surinam, Newport, and Philadelphia.