Synagogues of Western Sephardic Diaspora Knock, Knock — The Divine Presence Can Be Found in the Home by Mr. Leonard Grunstein

On Fragmentary Judaism: The Approach of R. Aharon Lichtenstein towards Nonobservant Jews 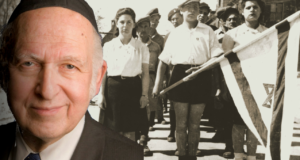 Prof. Adam Ferziger of Bar-Ilan University has researched and written about the way that Orthodox views toward nonobservant Jews developed between 1770 and 1918. This issue became acute because of the serious defection from Orthodoxy during that time. Indeed, by World War I, only twenty percent of German Jewry was Sabbath observant. In this talk, Prof. Ferziger explored how the approach of R. Aharon Lichtenstein differed from approaches advanced by three important rabbinic figures in the twentieth century.

Abraham Isaac Kook (Russia, Israel, 1865- 1935) applied his focus on redemption and messianism to his discussion of nonobservant Jewry. He viewed outreach among nonobservant Jews as a fulfillment of the kabbalistic idea of raising the hidden sparks. He maintained that while all Jews should be characterized as segula (treasured), the additional characteristic of behira (chosen) depended on an individual’s observance.

Joseph B. Soloveitchik (Poland, US, 1903-1993) similarly explained that while a covenant of fate, brit goral, binds all Jews regardless of observance, an additional covenant of faith, brit Sinai, binds Torah observant Jews.

All three of these twentieth-century Rabbis made room for non-orthodox Jews in their world view but maintained an axiological hierarchy privileging Orthodox Jewry. R. Aharon Lichtenstein articulated a new approach, which Ferziger terms “fragmentary Judaism.” In this approach, one must consider all of elements that make up each Jew’s behavior and not simply the sum total of his observance or nonobservance. For instance, R. Lichtenstein has said that an Orthodox Jew can learn from non-Orthodox Jews how to improve his behavior in a certain realm – moral, devotional, or even theological. Each Jew should be viewed through many different lenses and one can embrace the elements that are correct and reject the elements that are lacking. Ferziger posited that R. Lichtenstein’s complex and nuanced way of viewing nonobservant Jews had roots in his earlier education. R. Lichtenstein studied Christian Humanist literature in university and learned to find moral lessons even in works that were theologically objectionable from a traditional Jewish perspective.