Knock, Knock — The Divine Presence Can Be Found in the Home by Mr. Leonard Grunstein Cohen Speaks About Biblical Interpretation 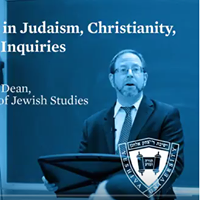 In 2010/11, Dr. Mordechai Cohen headed a fourteen-member research group of distinguished scholars from America, Europe, and Israel at the Institute for Advanced Studies in Jerusalem. Their study aimed to bring to light aspects of interpretive approaches to sacred scriptures in the three faith traditions that remain hidden until set in relation to one another.

In his talk, Dr. Cohen spoke about the work product of the research group, a volume he edited with Adele Berlin entitled Interpreting Scriptures in Judaism, Christianity and Islam. He showed how the Jewish tradition of Bible interpretation (parshanut ha-miqra) is best understood when we consider how our great commentators, such as Saadia Gaon, Rashi, and Maimonides, met the cultural challenges posed by Muslim and Christian interpretation of scripture.

In the Spanish – Andalusian tradition, Moshe Ibn Ezra (11th cent. Spain) drew upon Arabic poetics to write his Kitāb al-Muḥāḍara wa al-Mudhākara, in which he highlighted poetic techniques found within the Bible. Maimonides, in the same tradition, used terms and concepts from Muslim jurisprudence in privileging peshuto shel miqra in his halakhic codification.

Rashi may also have been aware of intellectual trends in his surrounding culture, which was Christian and not Islam. A contemporary of his, Bruno of Cologne, who came to be known as St Bruno the Carthusian, wrote a commentary to Psalms in which he critically selected Christological interpretations of the early Church fathers. St. Bruno selected those interpretations that best fit the language and sequence of the text. This is similar to Rashi’s endeavor in his commentary to the Bible, in which he critically selects midrashim that fit and elucidate the words of the text.