Material Culture in the Sephardic Atlantic – A Student’s Summary

Dr Laura Arnold Leibman, a professor of English and Humanities at Reed College, delivered a lecture on the topic of “Jews, Race, and Material Culture.” Dr Leibman, as a scholar of material culture, analyzes artifacts rather than documents in order to draw historical conclusions, and in this talk, she guided the students through analyses of depictions of Jews in caricatures, sketches and paintings in order to draw conclusions about racialized depictions of Jews, largely in the 1800’s in North and South America.

The lecture began with an introductory look at two types of depictions of Jews, one a 1723 sketch of Portuguese Jews in Amsterdam doing hakafot in their synagogue and the other a pair of propagandistic caricatures of Jews from Nazi Germany. As students raised various differences between the illustrations, specifically focusing on various anti-semitic tropes invoked in the Nazi cartoons, a clear contrast began to emerge- in 1723, a drawing of Jews made them look “normal,” like any other Europeans of the time and place, and in the 1930s, drawings depicted Jews as not just “others,” but vermin, untrustworthy, predatory, and ugly. Sometime between 1723 and the 1930s, a shift had occurred in which Jews went from being depicted as an ethnicity (an in-group with unique cultural and religious markings) to a race (a grouping imposed from the outside and assigning negative and innate physical behavioral characteristics to the group), and Dr Leibman led the group through an analysis of art throughout the 19th century which showed that this trajectory of racialized Jewish depictions came in concert with the legacy of the Inquisition, slavery, imperialism, and Jewish emancipation.

The class looked at sketches by Jacques Benoit, a Belgian artist who sketched and painted scenes in Dutch Suriname and Curacao, and who betrayed, in several of his paintings, racist attitudes toward African slaves, native tribespeople, and Jewish settlers. Dr Leibman led the class through an analysis of one painting in which he depicted a shop in which a Jewish merchant and an African tailor are serving African and native clientele; students could see many ways in which the artist purposefully used racist tropes to compare both the Jewish merchant and the African tailor are compared to a monkey in the image, and analyzed the anti-semitic tropes used in the depiction of the merchant (stereotypical trade, hooked nose, etc). She also pointed out the significance in the timing of Jews’ full emancipation in colonies like Jamaica and Curacao- the timing of Jews’ receiving rights such as the right to vote often coincided with (in Jamaica EXACTLY coincided with) the freeing of African slaves, something which influenced a racialized look at Jews, especially by those who supported slavery. Other paintings in the lecture, such as two of a carnival by Isaac Belisario, invited the class to explore the theme of racialization in art. Belisario was a prominent member of the Sephardic community of Jamaica and one of the more famous artists of the colonial period. His depictions of carnival opened up a discussion of the racial dynamics in the work of this Jewish artist.

Another major theme of her lecture was depictions of clothing and dress by Jews. In this period, cloth and clothing styles were strictly regulated by one’s class and legal status, with elegant clothing styles being extremely fitted and formal and, in contrast, with some colonies having sumptuary laws which forbade the lower classes from covering certain parts of the body. On the one hand, Dr Leibman showed several paintings of Jews in which pains were taken to show that the Jews had formal high collars, elegantly tapered torsos, and  sophisticated hair styles like those of their Christian compatriots. On the other hand, a painting of several slaves of different faiths, including a Jewish slave, showed the Jewish slave being the least dressed of all of the others, showing a specific degradation of the Jew through her clothing. Similarly but in a different vein, a sketched caricature of a Jew, Mordecai Manuel Noah, by someone known only by the signature Weedon, shows Noah in dress which is meant to demonstrate that Noah is aping conventional fashion of the time- the collar, the hair, the clothing- but that he cannot pretend to be of the right caliber, at least sartorially. His hair is shown to be unruly, his collar all the way up to his scalp, his coat baggy and his skin, tellingly, sketched dark- a combination of a racialized perception (in a time in which slavery was still a force) and a perception that no matter how much the Jew tries to blend in with the gentiles, the truth will always get out.

The talk was one which fit in well with the overall themes of Dr. Ronnie Perelis’ class, Jewish Presence in Latin America, which focuses on Jews in Latin America- and the phenomenon of slavery cannot be ignored in that case. Through Dr Leibman’s lecture, the class was able not only to reexamine Jews’ connections with slavery during their settlement in Latin America and the Caribbean, but also to examine the possibility of Jews being seen in a racialized light by other Europeans, even as the Jews themselves, in fact, saw the African slaves in this racialized light and saw themselves as white and European. 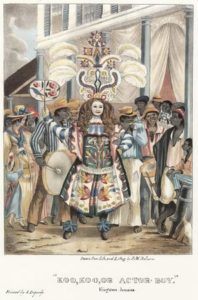 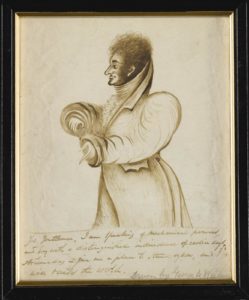