On April 10, 2018 the Bernard Revel Graduate School hosted Rabbi Jeffrey Saks (Revel MA 1994), who spoke about S.Y. Agnon, his contribution to Hebrew literature, and the challenges of editing and translating the Nobel Prize winner’s works. In high school, Saks received a copy of S.Y. Agnon’s “Twenty-One Stories” from his grandmother. Even in English translation it made a profound impact on him. Since then he has grown to appreciate Agnon’s rich works in Hebrew and now is the founding director of the Academy for Torah Initiatives and Directions in Jerusalem, and its WebYeshiva.org program, as well as Director of Research at the Agnon House and Series Editor of the Toby Press Agnon Library.

Saks gave examples to highlight Agnon’s evocative style and the complexity of translating his writing, which draws heavily on all of classical Jewish literature. In many cases, a simple literal translation loses the implications of the original, which depends on an understanding of the Jewish literary tradition and customs.

“A Simple Story” in the citation below in Hillel Halkin’s translation—highlights this dilemma of expressing Agnon’s Jewish roots in translation. In Hebrew, he uses the currency of the perutah and dinar, coins mentioned in the Talmud. The English “penny” and “pound” are reasonable substitutes, and work perfectly on the idiomatic level, but do not convey the same connection to talmudic history. Although subtleties like this one are lost in translation, Agnon’s writing retains much of its vividness in other languages. As Saks noted, Agnon was awarded the Nobel Prize for literature by judges who read his work in German translation. 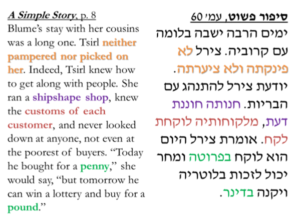 The challenge of translating the graphic novel written in the more condensed language of Hebrew to English. Two panels needed to be redrawn so that the action progresses in the proper order. 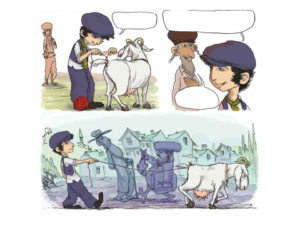 Agnon was from Buczacz, a small town in eastern Galicia (today’s Ukraine), spoke Yiddish, wrote in Hebrew and was immersed in biblical text and Jewish tradition. Saks, echoing Gershom Scholem, described Agnon as “the last Hebrew Classicist,” an author that mastered the “intertextual matrix.” His writing is much like an archeological dig, revealing layers of history and life as a reader or researcher peels off the layers of text, like an onion, working back to the classical sources Agnon was in dialogue with.

To see the catalog of the 15-volume series visit www.tobypress.com/agnon