The Gospel of Thomas According to Dr. Elaine Pagels 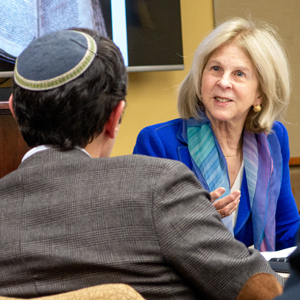 Dr. Elaine Pagels, the Harrington Spear Paine Professor of Religion at Princeton University, gave a talk on Thursday, October 25, titled “Exegesis of Genesis 1 in the Gospel of Thomas,” as part of the Seminar on Ancient Judaism, an initiative co-sponsored by the Office of the Provost, Yeshiva University and the Bernard Revel Graduate School of Jewish Studies.

Dr. Pagels is best known for her research into early Christianity and Gnosticism, explicated in The Gnostic Gospels, published in 1979, which explored conflicts in the early history of the Christian church revealed in the Nag Hammadi library, 13 leather-bound papyrus books discovered near the Egyptian town of Nag Hammadi in 1945.

The Gospel of Thomas, the subject of Pagels’ 2003 book Beyond Belief: The Secret Gospel of Thomas, was found among the papyrus volumes. It contains a collection of sayings attributed to Jesus, some of which, according to Pagels, can be found in one or more of the other four official gospels but some of which stand entirely on their own.

The subject of her talk concerned the differing portraits of Jesus that emerge when Thomas’ gospel is weighed against the synoptic gospels, especially the manuscript written by John, which Pagels suggests was drafted as a rebuttal to the picture of Jesus in Thomas, where Jesus is presented not as a divine entity but as a teacher seeking to help people discover the divine light within themselves.

In John, as well as in the other authorized gospels, she noted, the focus is on each person’s duty to know who Jesus is and accept his divinity because only by that knowledge will they will be able to enter the kingdom of heaven.

In Thomas, Jesus’ words enjoin people not to know him but to know themselves, since that is the only sure path to a sure salvation. “The Jesus represented in Thomas’ writing,” said Dr. Pagels, “tasks his disciples and all those who hear him with discovering the light within themselves.” When the disciples ask Jesus to tell them how they will end, he responds by saying, “Have you then discovered the discovered the beginning so that you inquire about the end?”, emphasizing that they will only know their ending  if they do the work of exploring their own beginnings: “If they say to you: ‘From where have you originated?”, say to them: ‘We have come from the Light…’”

Pagels pointed out that coming “from the Light” also meant coming from a place where souls were unified and “not divided by categories, such as your gender or name or passport,” a point she has explored in more depth in Adam, Eve, and the Serpent, written in 1988, where she investigated the views of women presented in Jewish and Christian teachings.