The Gospel of Thomas According to Dr. Elaine Pagels Don’t Sacrifice the Children

On October 31, 2018 · In Lectures and Activities, Publications 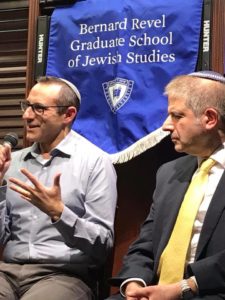 The title of the book is jarring because it connects Friedrich Nietzsche, a nineteenth century German philosopher known for his atheism and critique on religion, with Rav Joseph B. Soloveitchik, a twentieth century Orthodox Talmudic scholar and philosopher.  While there are irreconcilable differences between the two figures, Dr. Rynhold and Dr. Harris show that, surprisingly, there are many striking commonalities as well. They argue that Rav Soloveitchik’s philosophy responds to Nietzsche’s critique of religion, and reveals an understanding of traditional Judaism that absorbs Nietzschean themes and is thus immune to Nietzschean critique.

Though Nietzsche absolutely rejected God and religion, he was concerned with finding value in a post-metaphysical world. Rav Soloveitchik absolutely affirmed the truth of God and Judaism but side-stepped metaphysical inquiry and focused instead on the meaning of the life of faith in this world. Nietzsche routinely criticized religious systems as being psychologically unhealthy and “life-denying.” He argued that man should always be striving to affirm life. Rav Soloveitchik argued that Judaism is life affirming. He emphasizes that this world, Olam HaZeh, is preferable to the World To Come, Olam Haba. Rav Soloveitchik quotes from Rabbi Yaakov “one hour of repentance and good deeds in this world is better than all the time in the world to come” (Ethics of the Fathers 4) and notably does not quote Rabbi Yaakov’s other statements which privilege the World to Come. Nietzsche’s conception of a strong individual is one who can creatively express themselves. Rav Soloveitchik depicts the highest level of halakhic observance as one which does not feel like it is compelled but rather as if it were an  autonomous expression of one’s innermost being.

Drs. Rynhold and Harris hope that this book will be an important contribution. It offers scholarly analysis of the philosophical positions of Nietzsche and Rav Soloveitchik. More than that, it hopes to allow Jews today to think about their religion in more sophisticated ways and infuse Judaism’s system of practice with meaningful thelogies.