The Great Transition: The Emergence of Jewish Culture in the Middle Ages Is It Good for the Jews and Why Does the NYT Purport to Be the Arbiter?

What did the Ten Commandments Look Like? Depictions in Text and in Art from the Bible to Rembrandt 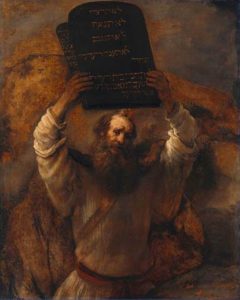 Moses with the Ten Commandments

On Nov. 27, 2018, the Bernard Revel Graduate School and the Yeshiva University Museum hosted Prof. Jordan Penkower of Bar Ilan University for a presentation on “What did the Ten Commandments Look Like? Depictions in Text and in Art from the Bible to Rembrandt.”

Prof. Penkower explored the depictions of the Ten Commandments in two paintings by Rembrandt. In both paintings, Rembrandt painted five commandments on each tablet in accordance with the tradition of the Midrash. Penkower noted that in one painting Rembrandt centered the five commandments on the second tablet. He suggested that this reflects the way the commandments are divided in the Masoretic text, with closed portions between them. Penkower further suggested that Menasseh ben Israel, the well-known Portugese rabbi and author, prepared a prototype of the Ten Commandments for Rembrandt to copy in his paintings. To support this theory, Penkower marshalled two other instances of collaboration between Menasseh ben Israel and Rembrandt. In his painting of Daniel’s “writing on the wall,” Rembrandt follows Menasseh’s understanding that the words were written vertically. Menasseh ben Israel’s book Even Yikarah also features four engravings by Rembrandt.