Heal the Victims; Don’t Sacrifice Them to a Cause Kvetching and the Divine

The Redemptive Mission of Hasidic Teaching 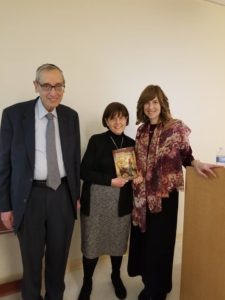 Dr. Ora Wiskind-Elper, a scholar of Jewish thought, literary theory, and intellectual history, delivered a lecture at Yeshiva University relating to her newest book, Hasidic Commentary on the Torah. Wiskind- Elper began by explaining that her approach to the study of Hasidut is focused on the content of Hasidic teaching rather than any political impact it may have had. Likewise, rather than apply a programmatic approach to explain the goal of all Hasidic hermeneutics, she prefers to let the texts speak for themselves and present the messages that the Hasidic masters were hoping to convey to their students.

In this lecture, Wiskind-Elper focused on the redemptive mission of Hasidic teaching. This mission is first expressed in the famous Iggeret haKodesh of the Ba’al Shem Tov (Besht, Yisrael ben Eliezer, c. 1698 – 1760, Poland). There the Besht recounts his meeting with the Messiah who informed him that redemption would come only when “your springs disperse abroad (Proverbs 5:16),” that is, when Hasidic teaching would be widespread. This infused the Besht and his students with a zeal to spread Hasidut, and in so doing, bring the redemption closer.

Wiskind- Elper pointed to an expression of this redemptive mission in a work of Kalonymus Kalman Epstein, the first Rebbe in Cracow. In his essays on the Torah, Maor VaShemesh (c. 1753) , Epstein offers striking redemptive readings of some verses.  For example, though Deut. 28:63, “… G-d will rejoice over you to cause you to perish, and to destroy you” is manifestly negative in tone, Epstein finds a way to explain the verse as a precursor to the ultimate redemption. “In all their (Israel’s) pain, He (G-d) is pained…and then the distress is removed.”

Epstein’s grandson, the famous Piaseczno Rebbe, Kalonymus Kalman Shapira (1889-1943, Poland) took up the mantle after him. He is most known for his pedagogical works, such as Hovat haTalmidim, intended for younger students, but he also authored Mevo haShe’arim, a sophisticated presentation of Hasidut. In all his writings, R’ Shapira hoped to reestablish Hasidic identity which had been badly shaken by the turmoil of WWI. The Mevo haShe’arim emphasizes the honor of every Jew and the possibility to infuse the physical and the mundane with spirituality, concepts which were especially important to express in the stultifying atmosphere of the Warsaw ghetto. Shapira’s adherence to the redemptive mission of Hasidic teaching is perhaps most evident in the will he left with his manuscripts. “Please print on all my pamphlets that I ask and entreat every Jew to learn my books…” He hoped that his works would bring hasidic teaching to every Jew and thereby bring redemption closer.