Rethinking Kabbalah With Dr. Tzahi Weiss Dr. Moshe Sokolow on the Dialectics of the Rav

On November 12th, 2019, a new dimension of Torah u-Madda was opened in a program about the ancient Chinese philosopher Confucius and Ezra ha-Sofer, presented by Prof. Annping Chin of Yale and YU Bible Professor Mordechai Cohen. This was the fourth lecture event of Yeshiva University’s Chinese-Jewish Conversation (CJC). It took place at Yagoda Commons on the Beren Campus and was co-sponsored by the Katz School, the Bernard Revel Graduate School of Jewish Studies and the Confucius Institute at SUNY. A video recording of the event is on the CJC website.

Provost Selma Botman opened the program by emphasizing the core values of family and education shared by the Chinese and Jewish traditions. She spoke passionately about the strong values conveyed by her parents, both hard-working immigrants from Russia, who sought to improve the prospects of their children through higher education.

Offering greetings on behalf of SUNY was Dr. Gui Albieri, Vice President for Student Affairs and Chief Diversity Officer at the State University of New York, and American Director for Confucius Institute for Healthcare at SUNY College of Optometry. Albieri defined himself as a “part-time philosopher” and revealed to the audience that he has long been a devotee of Prof. Chin’s works—and that he was excited to finally meet her in person. 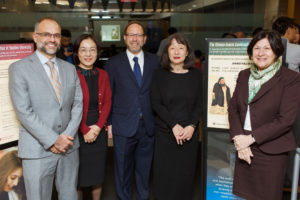 In the first part of the program, Prof. Cohen made a comparison between Confucius and Ezra, who were near contemporaries. Both of these great, spiritually motivated men lived in times of political weakness and sought improvement by restoring the values of their respective ancient traditions. Confucius looked to the early rulers of the Zhou dynasty (11th century BCE) for inspiration and expounded their values to his students. According to tradition, Confucius edited the “Five Classics” that embody the wisdom of ancient Chinese culture—and which would come to be known as the “Confucian canon.”  The teachings of Confucius himself are recorded in the work known as “the Analects” (Lun yu). According to Jewish tradition, Ezra, together with the men of the Great Assembly, brought together and edited the 24 books of the Tanakh (Hebrew Bible). During his lifetime, Ezra was faced with a Jewish population in Judea that was ignorant of Torah law, which he reinstated through a dedicated project of education that culminated in the public reading of the Torah in Jerusalem, as described in the book of Nehemia, chapter 8.

“Confucius, You Surprised Me: Readings from the Analects on Learning, Governance, and the Political Life” was the title of the lecture by Prof. Chin, a leading world scholar of Confucian philosophy. She focused on three chapters of the Analects to discover what Confucius thought about learning, governance, and the political life: How they relate to one another and how they translate into action and policies. Chin also discussed what might seem surprisingly fresh and compelling about Confucius’ views and what they can teach us as we confront our own political realities. 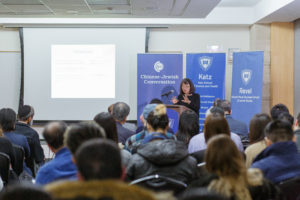 The selections from the Analects (Book 12 – 14) addressed three parts: Learning, Governance, and Political Life. In the first part, “Learning,” Chin cited the observation Confucius made about a young man who seemed to be very accomplished: “He is not someone who seeks to make progress. He simply wants to grow up fast” (Book 14.44). Chin explained the contrast between “making progress” and “growing up fast”. For Confucius there are no shortcuts in learning; one doesn’t truly “grow up fast” intellectually. The real masters of learning make their progress gradually, through perseverance and repeated practice.

In the second part, “Governance,” Chin cited Book 13.18 of the Analects:

The governor of She said to Confucius: “Right here, in our place, there is a man called Upright Gong. When his father stole a sheep, he bore witness against him.”

From the governor’s perspective, “uprightness” was manifested when the son reported his own father to the local law enforcement agency. Yet Confucius believed that “uprightness” was shown when the fathers and sons protect each other from outside authorities. Chin pointed out that here Confucius addressed a moral question: How do we define “uprightness”? Is it defined by the law, or by some other value system?  For Confucius this virtue was embedded human nature and the complex inter-relation between respect for family and for society.

The third part, “Political Life,” or “Politics” was the main focus of the lecture. Chin cited from the Analects, Book 14.39, which uses a series of metaphors:

The Master was playing the stone chimes in Wei when a man, carrying a bamboo basket, went past his door. This man said, “This playing is fraught with a heavy and careworn heart.” He continued, “How squalid this keng keng sound! If no one understands him, then he should just keep what he believes to himself and that is all: ‘If the water is deep, just wade across it. If the water is shallow, lift your hem and cross it.’ ”

Dr. Chin emphasized that the recluse (the man with the bamboo basket) resorted to metaphor to imply his viewpoints about politics. In the sentence “If the water is deep, just wade across it. If the water is shallow, lift your hem and cross it,” the water represents the political situation, and the recluse’s advice to Confucius was that when the current situation becomes hopeless, it is a waste of time and effort to even become involved. Confucius said about the recluse:

Based on the commentators of the Analects, Chin explained this as a veiled critique. In one sense, Confucius envied the recluse for the freedom to stay apart from the troublesome affairs of society and the world around him. in this worldly world. But Confucius chose the more difficult path to stand out politically and seek proactively to change society for the better.

Lastly, Chin cited a famous passage, Book 13.3 of the Analects, which focuses on Confucius’ political aspirations:

If names are not rectified, what is said will not seem reasonable. Then what is said does not seem reasonable, nothing will get accomplished. When nothing gets accomplished, rites and music will not flourish. When rites and music do not flourish, punishments and penalties [will take their place, and they] will fail to be just when put into use. And when punishments and penalties fail to be just in practice, people will not know where to put their hands and feet. Thus when a gentleman names something, the name can surely hold up in a speech. When he says something, his words can surely be carried out in action.

Here Confucius expresses his famous conception of the “rectification of the names,” meaning to make words correspond to reality–according to traditional social designations and relationships. In his view, every member of society, from the political leadership on down must fulfill their proper roles, which will bring harmony to the country in a society enriched by music, art, and literature.

More than 100 people participated in this event and learned from the lecture. In the subsequent discussion, the audience asked questions about the relevance of Confucius in our politically challenged society. As Chin noted—Confucius’ insights often speak to our modern situations with great insight. 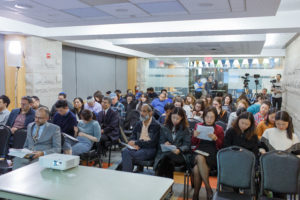 Closing up the event, Cohen thanked the speakers, the organizers, and the audience and noted that more activities are planned to the Chinese-Jewish Conversation next semester. 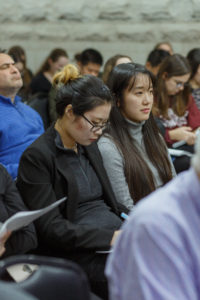