The Rule of Peshat by Mordechai Z. Cohen 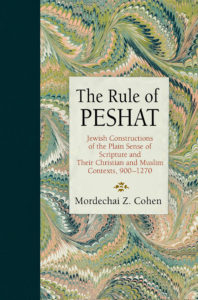 The Rule of Peshat: Jewish Constructions of the Plain Sense of Scripture and Their Christian and Muslim Contexts, 900–1270 by Mordechai Z. Cohen was just been published by University of Pennsylvania Press:

ABSTRACT: This volume sheds new light on the vibrant medieval tradition of peshat interpretation, which was intertwined with other disciplines and cultural influences. Beginning in the ninth century, Jews in the Muslim East drew upon Arabic linguistics and Qur’an interpretation to open new avenues of philological-literary exegesis, as opposed to the rabbinic midrashic modes of reading. This Judeo-Arabic school later moved westward and reached its climax in al-Andalus (Muslim Spain) in the eleventh century. At that time, a revolutionary peshat school was also pioneered in northern France by the Rashi (1040–1105) and his circle of students, whose methods are compared in this volume with contemporaneous trends in Latin learning. The heretofore little-known Byzantine exegetical tradition is also outlined in this volume—beginning with recently discovered fragments of a tenth-century commentary penned in or around Byzantium, followed by later commentaries written in the Balkan orbit, mostly notably Leqah Tov by Tobiah ben Eliezer. The volume then moves on to three pivotal figures who consolidated the medieval peshat tradition: (1) Abraham Ibn Ezra (1089–1164), who epitomized Andalusian Bible exegesis as an itinerant scholar in Christian lands, where he encountered Rashi’s peshat model; (2) Moses Maimonides (1138–1204), who drew upon Greco-Arabic philosophy to interpret the Bible rationally, and upon Muslim jurisprudence to establish the biblical sources of Jewish law; (3) Moses Nahmanides (1194–1270), who developed a four-layered interpretive scheme that is compared with the medieval Christian notion of the four senses of Scripture.