The Rule of Peshat by Mordechai Z. Cohen Final Judgement and The Dead in Medieval Jewish Thought

On July 16, 2020 · In Faculty, Student and Alumni Profiles, News, Publications

The Chinese-Jewish Conversation (CJC) held its fifth event, “New frontiers of Torah U-Madda: Chinese and Jewish Ecological Values,” on March 3, 2020, with the support of the Katz School of Science and Health, the Provost’s Colloquium Initiative, and the Bernard Revel Graduate School of Jewish Studies. CJC director Prof. Mordechai Cohen opened with a discussion of the biblical precept of shmitta and the socio-ecological values it represents. Scientifically speaking, the obligation to let the land lie fallow every seventh year protects the environment, as it ensures the land’s continued fertility by preventing the depletion of its nutrients. But shmitta has other important features: on the seventh year all loans are forgiven. In effect, society re-boots: the land, the agricultural cycle, and commercial activity begin anew. After seven shmitta years, the fiftieth year is the Jubilee. The shofar is blown and “liberty is proclaimed throughout the land” (Leviticus 25:10, engraved on the Liberty Bell). In biblical times, impoverished people were sold into servitude to repay their debts. On the Jubilee year, these slaves go free, and are granted a new beginning. Land that had been sold reverts back to its original owners. As God says in Leviticus 25:23, “The land must not be sold permanently, because the land is mine and you reside in my land as temporary dwellers.” We never truly “own” the land. We use it—but it belongs to God. This provides a comprehensive explanation for the Jubilee and the shmitta. Those who hold financial power—be they slave owners (in ancient times) or lenders—must understand that their wealth is entrusted to them by God and ultimately is temporary. It is their social responsibility to let others have the opportunity to advance. The shmitta requirement to let the land lie fallow, likewise, demonstrates that we do not own the land. Therefore we are not permitted to ruin it. We are entrusted with the land and may use it, but are obligated to preserve it for coming generations. 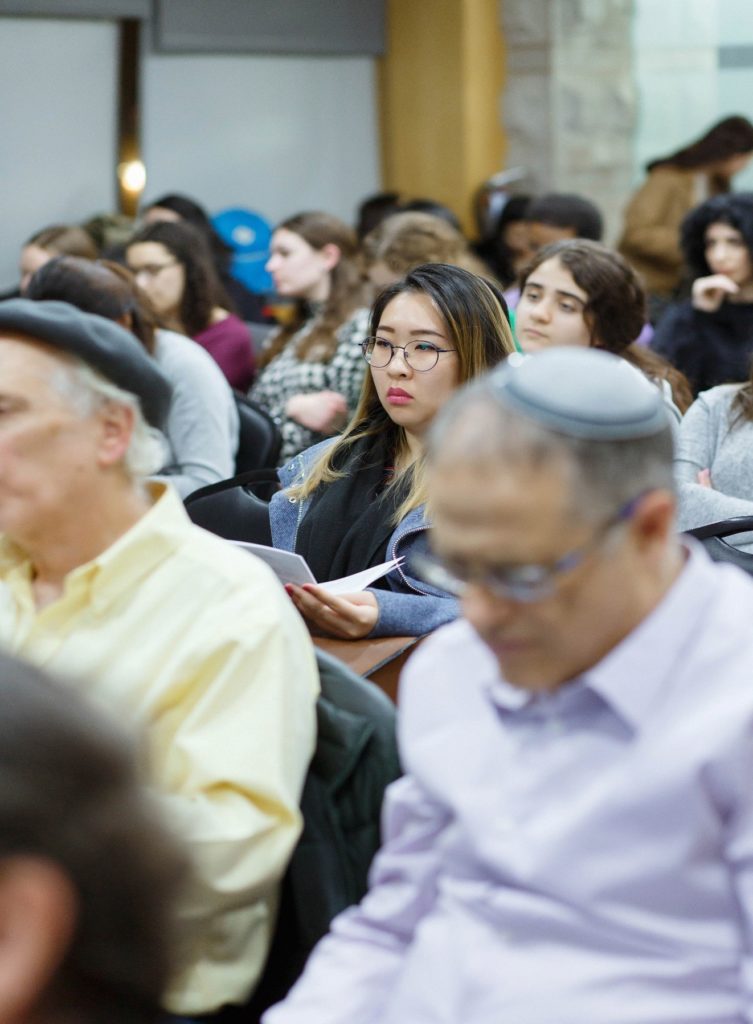 In ancient times Israel was an agrarian society. The Jewish people experienced and appreciated the natural landscape of the Land of Israel. All of this changed with the destruction of the Temple in 70 CE, when we were exiled from the land and essentially lost our physical connection with it. “The Land of Israel” (Eretz Yisrael) was primarily a spiritual ideal over the long exile. In the modern state of Israel, however, Jewish people have re-established their connection with the natural landscape. This is reflected in modern art and literature, as brought out in the next presentation, by Dr. Rachel Ofer, Professor of Literature at Efrata and Herzog Colleges in Israel. Deuteronomy 20:19 prohibits cutting down fruit-bearing trees during a siege, saying: “For is the tree in the field a man, that would oppose you in battle?” In the Bible, this is a rhetorical question, with the obvious answer: No! But, as Dr. Ofer noted, this verse is given new meaning by the modern Israeli poet Nathan Zach, in his Hebrew poem: Ki ha-Adam Etz ha-Sadeh (“For man is a tree in the field”), meaning that there are many points of similarity between man and the tree—an element of the natural world around us. This identification is also brought out by the modern Israeli artist Anna Ticho, who portrayed trees and plants expressing human emotions. Dr. Ofer concluded with the Israeli singer Shalom Hanokh’s rendition of “For man is a tree in the field.” 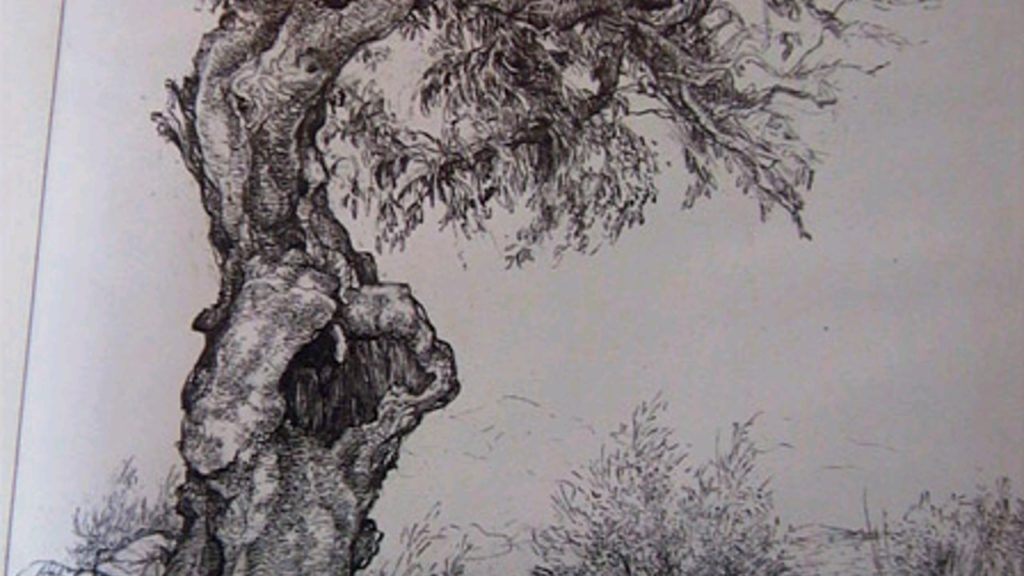 The main speaker of the evening, Daniel K. Gardner, Dwight W. Morrow Professor of History at Smith College, is a world-renowned expert on the Confucian tradition and its contemporary relevance. His current project, for which he was awarded an Andrew Carnegie Fellowship in 2016, is “Imagining an ‘Ecological Civilization’: China’s Environmental Turn in the 21st Century.” Gardner was interviewed by Elena Peng, a co-author on Chinese environmental legislation since 2014, and now a consultant for the CJC. Referring to Gardner’s 2018 book, Environmental Pollution in China: What Everyone Needs to Know, Peng remarked: “What I want to know is what motivated China now to adopt a new policy of environmental consciousness?” Gardner explained that it reflects the confluence of socio-economic and political-ideological factors. To begin with, pollution was causing increasingly visible hazards and dramatic threats to public health. Garbage was floating in the rivers, and city dwellers were choking on smog. China’s earlier policy to “pollute first and clean up later” allowed for economic prosperity; but the cost was becoming too high. In combatting pollution, the Chinese Government turned to the Confucian tradition for inspiration—making the vision of an ecological society a political goal. Speaking in ideological terms, Pan Yue, Vice Minister of Environmental Protection, wrote in 2011 that “for the past century, China has studied the west and followed the western path of industrialization,” but that now “it should take time re-examine… its own cultural traditions.” As he continues: “One of the core principles of traditional Chinese culture is that of harmony between humans and nature.  Different philosophies all emphasize the political wisdom of a balanced environment.  Whether it is the Confucian idea of humans and nature becoming one, the Daoist view of the Dao reflecting nature, or the Buddhist belief that all living things are equal, Chinese philosophy has helped our culture to survive for thousands of years.  It can be a powerful weapon in preventing an environmental crisis and building a harmonious society.” (Pan Yue, “Ecological Wisdom of the Ages,” 2011 https://chinadialogue.net/nature/4045-ecological-wisdom-of-the-ages/). 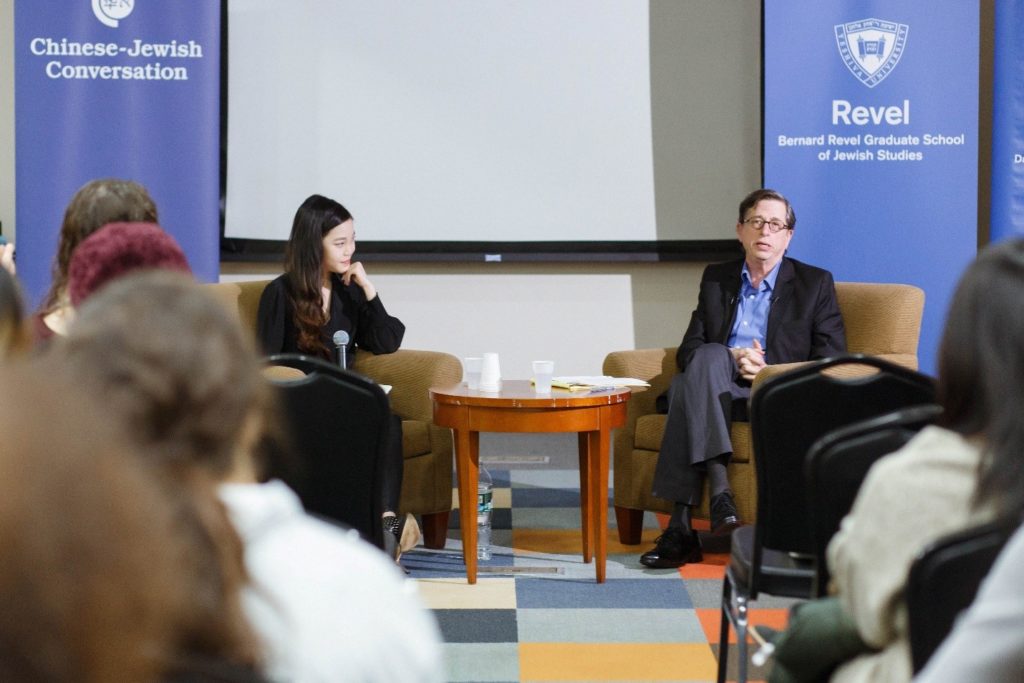 Gardner cited sources for this from the Chinese classics. The ancient adage “Heaven and humankind are one” (tian ren he yi) was explained in the Confucian tradition to mean that human beings and all of nature must exist in harmony. As the 16th century Neo-Confucian philosopher Wang Yangming explained: “The great man regards heaven and earth and the myriad things as one body… when we see plants broken and destroyed, we cannot help a feeling of pity. This shows that our humanity forms one body with plants. It may be said that plants are livings things as we are.” The 11th century Neo-Confucian mystically-oriented philosopher wrote: “Heaven is my father and earth is my mother, and even such a small creature as I finds an intimate place in their midst. Therefore, that which fills the universe I regard as my body and that which directs the universe I consider as my nature. All people are my brothers and sisters, and all things are my companions.”

Wang’s words resonate with the aforementioned Jewish notion that “man is a tree of the field” and the identity between humanity and nature it implies. As Peng pointed out, the Chinese concept of heaven (tian) has been compared to the Judeo-Christian notion of God, and the Bible likewise says that man was formed in God’s image. Moreover, the Bible speaks of human beings metaphorically as “children” of God (Deuteronomy 14:1). And so, the Chinese notion that humanity and heaven are one has much in common with Jewish thought—and the vision of the ecological society emanates from both traditions.

Peng asked, however: “Did Confucius say it? Did Confucius mean it?” Can the modern value of environmental protection truly be traced to the classical Chinese sources? To this Gardner offered a twofold answer. He admitted, first of all, that he’s not sure if the modern concerns can be read into the ancient philosophical texts as their true intention. However, he went on to say that just like any religious tradition, the Confucian traditions must be re-interpreted to address the challenges of a modern world, and this gives the ancient texts new relevance. Professor Gardner’s own research into neo-Confucianism is a prime example. Much as Saadia Gaon and Maimonides interpreted the ancient Jewish texts philosophically in their Muslim cultural-intellectual context, Chinese scholars of the Song Dynasty (960-1279) reinterpreted the traditional Confucian texts in light of the metaphysical concerns of their time, spurred by the competing philosophies of Daoism and Buddhism. In a 1998 article, Gardner himself offered a comparison between Midrash and the modes of interpretation attested in the Confucian tradition. Both, he argues, respond to similar stimuli: to address new cultural and intellectual pressures and reaffirm the traditions of the past. As he writes: “Any threat to the hegemony of the… [sacred literary] canon and to the lived tradition that takes that canon as its inspiration incites commentarial activity and response.” (See Daniel Gardner, “Confucian Commentary and Chinese Intellectual History,” The Journal of Asian Studies, Vol. 57, 2 (1998): 397–422.) 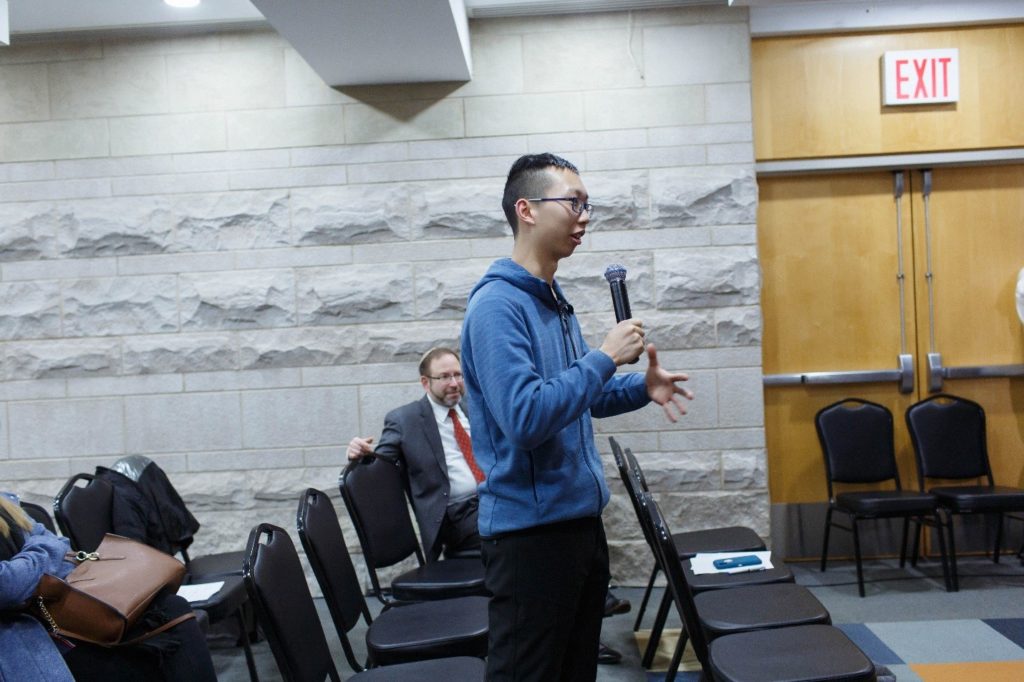 After the event, many in the audience noted that the evening brought out the ideals of Torah U-Madda in exciting new ways. As one observer remarked, “This interface of ideas and cultures is what a university is about! Comparisons between Jewish and Confucian interpretations; mix of the ancient and modern; shmitta and environmental protection; modern Israeli, song, art and literature illustrating the Chinese idea that man and heaven are one.” 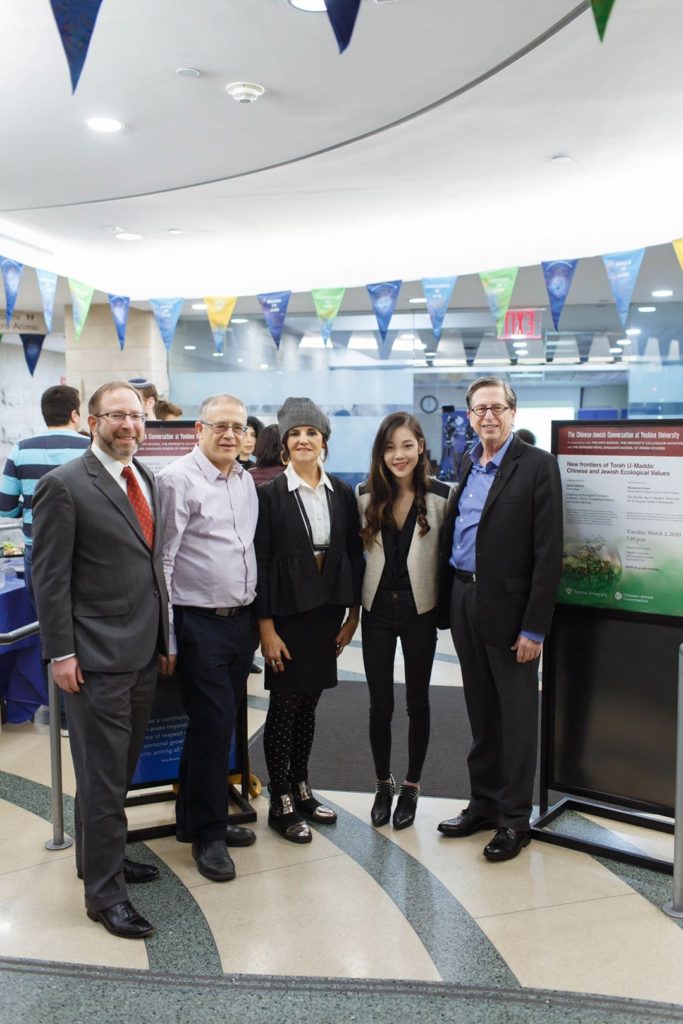 The event was recorded and is on the Revel and CJC YouTube channel:

“Man is a tree in the field” by Rachel Ofer

HIGHLIGHTS OF THE ENTIRE EVENT