Dr. Ephraim Kanarfogel, E. Billi Ivry University Professor of Jewish History, Literature, and Law at the Bernard Revel Graduate School of Jewish Studies, has published Brothers from Afar: Rabbinic Approaches to Apostasy and Reversion in Medieval Europe, with Wayne State University Press, which has published three of his previous books. (Dr. Kanarfogel has authored or edited 11 volumes in all.)

In this new book, Dr. Kanarfogel challenges a long-held view that those who had apostatized and later returned to the Jewish community in northern medieval Europe were encouraged to resume their places without the need for a ceremony or act that verified their reversion.

His evidence suggests that from the late 12th century onward, leading rabbinic authorities held that returning apostates had to undergo ritual immersion and other rites of contrition. “I also identity,” he says, “a series of concomitant shifts in rabbinic positions during the 12th and 13th centuries concerning the halachic [Jewish legal] status of ongoing apostates, which I argue were also developed largely in response to changing Christian perceptions of Jews.” 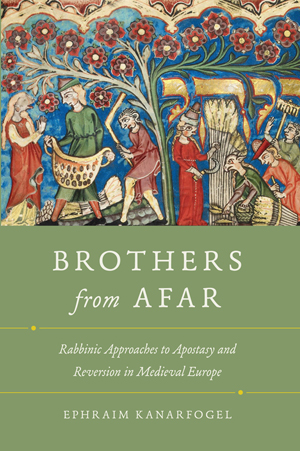 Dr. Paola Tartakoff, professor of history and Jewish studies at Rutgers University, finds that Brother from Afar “reorients understandings of the attitudes of medieval rabbinic authorities toward apostasy, opening new avenues for research in medieval Jewish-Christian relations,” and Dr. Edward Fram, Solly Yellin Chair of Lithuanian and Eastern European Jewry at Ben-Gurion University of the Negev, praises Dr. Kanarfogel for unearthing “a goldmine of material […] that sheds a whole new light on the place of repentant apostates in medieval Jewish societies.”

With this publication, Dr. Kanarfogel cements his reputation as a preeminent scholar in the fields of medieval Jewish intellectual history and rabbinic literature, writing prolifically in both English and Hebrew about these topics. (His 100th scholarly article is in press.)

His first book, Jewish Education and Society in the High Middle Ages, won the National Jewish Book Award for Scholarship. Dr. Ivan Marcus, Frederick P. Rose Professor of Jewish History at Yale University, characterized Peering through the Lattices: Mystical, Magical and Pietistic Dimensions in the Tosafist Period as a “stimulating tour de force,” while Dr. Moshe Idel of the Hebrew University of Jerusalem concluded that it is “a major contribution to the understanding of medieval Jewish culture.”

The Intellectual History and Rabbinic Culture of Medieval Ashkenaz won the Goldstein-Goren Prize for Best Book (2010-2013), awarded by the International Center for Jewish Thought at Ben-Gurion University of the Negev, and the Association for Jewish Studies’ Jordan Schnitzer Book Award for the best book in biblical and rabbinic literature. Dr. Elliot Wolfson of New York University noted that “with the publication of this volume, Ephraim Kanarfogel has solidified his status as the leading intellectual historian of rabbinic culture in medieval Ashkenaz.”

Frequently invited to address international conferences in North America, Europe and Israel, Dr. Kanarfogel has been a three-time Fellow at the University of Pennsylvania’s Center for Advanced Jewish Studies and has held visiting appointments at UPenn and at Ben-Gurion University. He is editor-in-chief of the academic journal Jewish History and a lifetime Fellow of the American Academy for Jewish Research, where he has served as secretary and a member of the executive committee.

Dr. David Berger, former dean of Revel, was impressed by the “unprecedented detail” that Dr. Kanarfogel’s research uncovered about the actions and rituals required to readmit returning converts to the Jewish community as members in good standing. “As we have come to expect of Dr. Kanarfogel,” said Dr. Berger, “he has greatly enriched our understanding of a significant phenomenon that illuminates the development of halacha, the self-image of medieval Jewry and the relationship between Jews and their environment.”

Dr. Karen Bacon, the Mordecai D. Katz and Dr. Monique C. Katz Dean of the Undergraduate Faculty of Arts and Sciences at Yeshiva University, felt that Dr. Kanarfogel had outdone himself with this new publication. “Even for someone as remarkable as Dr. Kanarfogel, this new achievement is ‘off the charts’! Brother from Afar is a page turner, if one is allowed to say that about a scholarly work of this level of sophistication.”

FacebookTwitterLinkedInWhatsAppShare
If you enjoyed this article, please consider sharing it!