Today is Remembrance Sunday in the UK, when we honor the contributions of British and Commonwealth servicemen and women. I did not expect that it would also become a day on which I would, with deep sadness, also be honoring the memory of Rabbi Lord Jonathan Sacks. The sheer volume of tributes pouring out in the media, social and print, from world leaders and dignitaries, is a measure of the unquantifiable influence that Rabbi Sacks exerted within and far beyond the Jewish community. Such a tribute from me would pale in comparison. But I’ve realized as I sit here agonizing over what I should say, that measured intellectual tributes are for another day. Oddly enough, today it seems more appropriate to be almost self-indulgent, and remember the times I was honored to spend with him. Whether interviewing him early in his tenure as Chief Rabbi alongside my cousin (now Professor) Jonathan Rynhold when I was a simple undergraduate; drinking tea in his sukkah together with (now Rabbi Dr) Raphael Zarum; filming with him for his BBC Rosh Hashanah message in 1998; or sitting around the table at Hamilton Terrace where Rabbi Sacks would take the time to sit with the younger generation of Jewish educators who were barely finished – often indeed not yet finished – with their own education (when I’m sure some would have thought he could have better used that time with the great and the good). And what strikes me today is indicated by the parentheses above. That is, how many of the young people who sat around that table are now educators and communal leaders, rabbinic or otherwise, across the Jewish world. I know personally that I would not be doing what I do were it not for Rabbi Sacks. I guarantee that is the case for many of those from my generation posting today. Not only because he modelled what it was to be committed unapologetically to Orthodox Judaism without sacrificing – indeed while excelling – in the world of general philosophy and culture, but for taking the time to sit around the table not just with Prime Ministers and Presidents, but with us. To speak to us, to teach us. And to model right in front of our eyes what it is to be a Jewish leader, to be the voice of religious reason for a generation, and a public figure in whom we could all take great pride as a living, breathing kiddush hashem. יהי זיכרו ברוך 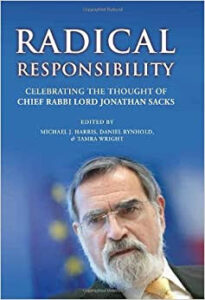