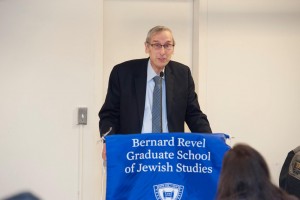 Who was Shabbetai Tzvi? Why was his messianic movement incredibly successful, even surviving the apostasy and death of the purported messiah? What lasting impact did this false messiah have on Jewish History?

On Tuesday Feb. 16, over 400 people joined a Zoom lecture organized jointly by the Bernard Revel Graduate School and the Young Israel of Great Neck to hear Dr. David Berger, former Dean and current professor at Revel, speak about one of the areas of his scholarly expertise.

Dr. Berger, drawing upon the work of Gershon Scholem and other academic treatments of the subject, first sketched a biography of Shabbetai Tzvi. Born in Smyrna in 1626, Shabbetai began acting strangely at the age of 22, pronouncing the name of God, telling the sun to stop in its tracks, later marrying a Torah scroll, and engaging in other bizarre, or even forbidden acts. Dr. Berger explained how this possibly manic-depressive individual’s eccentricities developed into a full-blown messianic movement with the involvement of Nathan of Gaza, who became the prophet and theologian for Sabbateanism, which at one point captured the allegiance – to a greater or lesser degree- of most of world Jewry.

Scholars argue as to the cause for Sabbateanism’s unprecedented success. Some point to the Chmielnicki Uprising in Poland, which occurred in 1648, the same year Shabbetai Tzvi began to garner attention. They suggest that the despair of Ashkenazic Jewry in the aftermath of the bloody uprising was fertile ground for a messianic movement. Gershon Scholem rejected this explanation on the grounds that the movement’s origin and greatest intensity were in the Sephadic orbit and instead emphasized the influence of widespread Lurianic mysticism in the movement’s success. Moshe Idel and others rejected this on the ground that Lurianic mysticism was not that widespread. A third, plausible factor is the extensive diaspora of Marranos, former Marranos, and relatives of Marranos. Crypto-Jews had been forced to declare their belief in a false messiah and now had the opportunity to welcome the true redeemer. An additional consideration is the rapid international communication that was available by the seventeenth century, a factor noted by Jacob Katz. Finally, the rational approach of Maimonides, who says THAT the exact messianic process is unclear, made it difficult to disprove that Shabbetai Tzvi might turn out to be the messiah.

Sabbateanism had a lasting impact on world Jewry. It led to communal weakness and a diminution of respect for rabbinic authority. It yielded a small but significant number of conversions to Christianity and perhaps contributed both to the rise of and opposition to Hasidism. The decline of traditional Jewish messianism and new movements of Emancipation, Enlightenment, Reform Judaism and Zionism have all been associated with Sabbateanism as well.

As always, Dr. Berger’s lecture was engaging, enjoyable, and erudite. The audio link is available here.