On December 9, 2021 · In Faculty, Student and Alumni Profiles, News

In Chinese, Hanukkah is 光明节 (Guāngmíng jié), “festival of light.” The Chinese word for “light” here also has the metaphorical sense of “hope,” as in Biblical Hebrew, for example in Psalms 27:1, “God is my light and salvation.” Hanukkah represents the hope of the Jewish people to overcome adversity even in the darkest hours through faith in God. That message is as true today as it was for the Maccabees in ancient Israel. A small group of Chinese YU students at the Katz School of Science and Health enjoyed a first-hand experience of this Jewish festival and learned more about its meaning and rituals at the home of Mordechai Cohen, Professor of Bible and Associate Dean of the Bernard Revel Graduate School of Jewish Studies, on the first night of Hanukkah this year, Sunday, November 28, 2021. This joyous event has since been posted and re-posted on WeChat—the popular Chinese social media app, bringing new meaning to pirsumei nissa, publicizing the miracles of Hanukkah. 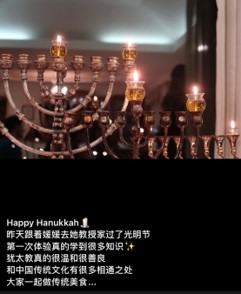 The Chinese-Jewish conversation (CJC) at YU, of which Professor Cohen is the founding director, held its last on-campus event on March 3, 2020: Jewish and Chinese visions of an Ecological Society, as reflected in biblical sources and modern Israeli culture, as well as ancient Confucian teachings and modern Chinese society. The next day, YU shut down because of the pandemic. Since then, CJC has worked mainly online, creating a robust video library and a blog on Jewish culture published in Chinese on WeChat.

Yet CJC was originally intended to provide a home away from home for our Chinese students at YU—and so, we sought an opportunity to hold an in-person gathering. As Allen Wang, from Beijing, remarked: “At Professor Cohen’s home, together with his family, my friends and I really felt at home. We tasted traditional Jewish foods and lit the first candle of Hanukkah together. We talked freely about Chinese and Jewish cultures. We increased our deep friendship from this gathering and look forward to the next one very much!” 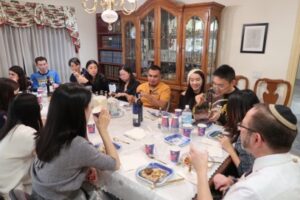 The CJC Hanukkah event indeed brought greater understanding between our two ancient cultures, as the Chinese students noted many similarities and shared values to their festivals back home, which, like Hanukkah, are family-oriented and involve lots of delicious foods. 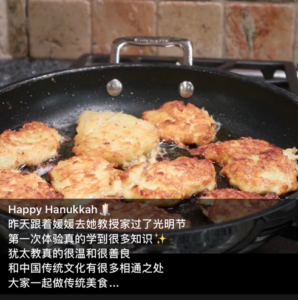 Grace Choi, from Wuhan, commented, “I had heard of Hanukkah; but this was the first time I learned about its origins and experienced it in a Jewish family. From the rituals to the food, to the story behind them, Professor Cohen gave us a special lesson, which gave me a deeper understanding of ancient Jewish culture. It is similar to Chinese culture. Both are thousands of years old, but still maintain their unique charm.” 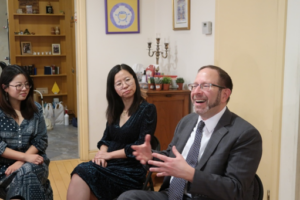 In the spirit of pirsumei nissa, “publicizing the miracle,” i.e., the miracles behind Hanukkah, Professor Cohen explained how the Maccabees miraculously prevailed over the Seleucid Greeks in the 2nd century BCE and established the Hasmonean kingdom, how they rededicated the Holy Temple, and how the small vile of oil they found, miraculously lasted for eight days.

The Cohen family lit the Hanukkah candles and sang Hanerot Halalu and Maoz Tzur with the Chinese audience, a group of young Chinese people eager to learn about Jewish culture, which, on the one hand is different from theirs, but, on the other hand, shares similarities, which reveal by investigating them further. 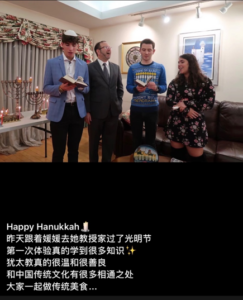 This impact is reflected in the words of Sophie Wai, from Tainan: “This was such a heart-warming night immersed in the Jewish culture. I love the part of our hosts singing Maoz Tzur and lighting up the Menorah one by one. It shows how Jewish people are closely related to their family and their culture.”

Apart from the rituals surrounding the Hanukkah candles, we also made latkes—which were eagerly consumed. 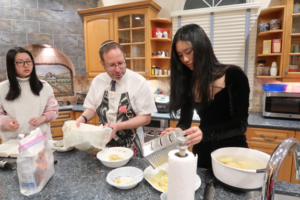 Actually, Professor Cohen, his family, and the students, even had fun grating the potatoes and onions (crying a little bit), combining the other ingredients and cooking the latkes all together. 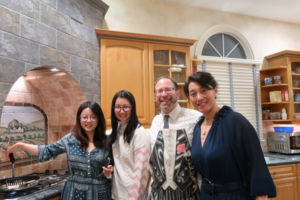 Christina He, from Beijing, remarked: “I learned lots of Jewish traditions and ate the very delicious potato pancakes! I also felt very excited to light the Hanukkah candle for the very first time. Many thanks to Professor Cohen, who hosted us!” 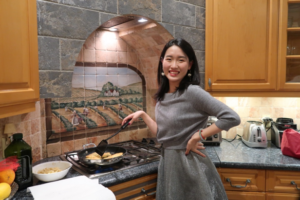 After dinner the Cohen family introduced the Chinese guests to various dreidel games, in which the Chinese students participated eagerly. As Riley Zhang, from Suzhou, China, remarked: “We also played with the spinning top (dreidel)! This is a very interesting game, everyone at the party is keen to show their skills best. Although winning more chocolate coins is exciting, spinning top is more like a spirit. It makes people willing to put down their phones and play games with their partners. This is a rare happy time. It reminds me of those happy moments when I was young.” 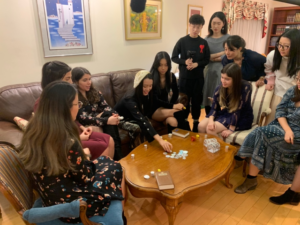 The Chinese students put their own spin, so to speak, on the dreidel games that reflects the outlook of traditional Chinese culture and values. As Ms Zhang continued: “I also saw the friendship and love between the children and the generosity of sharing with each other from this game. Some players would take the initiative to distribute to the person with the least chips, and the player with the most chips would continue to distribute to the person who lost the chips when turning to the next round. A dynamic balance was achieved in everyone’s hands. I think this might be the epitome of a fair society full of sharing spirit and love.” 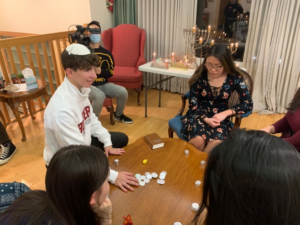 Ms Wai, likewise, remarked: “The Jewish dreidel game is simple but meaningful. I love that there is an option of giving away your chocolate coins to others and that everyone needs to give away one out at the end of each round. It reminds us the importance of sharing and caring for others!” 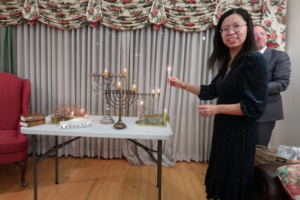 In the ancient Confucian tradition, learning and self-improvement through actions of caring for others in society are core values. It is not difficult to see, then, why Jewish tradition resonates with Chinese audiences. 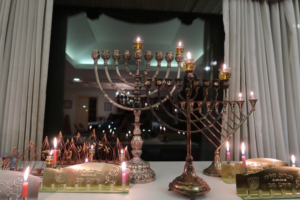 The warmth, light, and hope of Hanukkah, 光明节, as this gathering demonstrated, is just one example of how our ancient traditions can be a guide to us in the bustling modern world, as we strive to improve ourselves through learning and good deeds, in the hope of bringing harmony and peace to a world fraught with challenges and tensions.