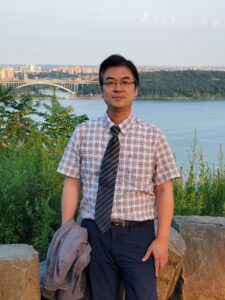 Dr. Jeong Mun Heo has recently been appointed as the Head of Development for South Korea at the Bernard Revel Graduate School of Jewish Studies.

Dr. Heo remarks, “I have been inspired by the leading voices of Rabbi Jonathan Sacks z”l on Jewish-Christian relations in his book, The Dignity of Difference. During my studies at Revel, I also have been deeply inspired by the values and ideas of Yeshiva University, such as Torah Umaddah and Torah Lishmah, encouraging a balanced perspective between faith and scholarship.”

It is his hope that the establishment of a Jewish-Christian certificate program will allow “many students, especially Korean students…to get familiar with a wide range of knowledge of Jewish studies and Jewish-Christian heritages.”

Jeong Mun Heo completed his Ph.D. at Revel in 2021. His dissertation is titled, “Images of Torah from the Second Temple Period Through the Middle Ages.” He also holds a B.Sc. in Mathematics and Computer Sciences from Kosin University and a M.Div. from Korea Theological Seminary in his native South Korea, and a M.A. in Jewish Education from the Hebrew University Jerusalem, as well as a Th.M. in Biblical Studies from Boston College. He hopes to continue research in the area of phenomenology of religion, and the philosophical and theological discourse between Judaism and Christianity.