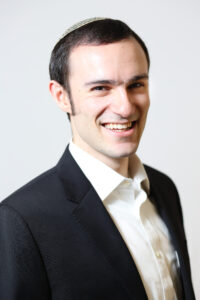 Shaul Seidler-Feller ’14YC, ’14BR, ’17R works as a Judaica consultant and cataloger for Sotheby’s Books and Manuscripts Department and is also a freelance writer, editor, and translator from Hebrew and Yiddish to English.

In addition to earning a bachelor’s in Jewish studies at Yeshiva College and a master’s in medieval Jewish history at Revel Graduate School, he also pursued semikhah (rabbinic ordination) at the Rabbi Isaac Elchanan Theological Seminary.

Revel News had a chance to catch up with him to discuss his career and how his education at Yeshiva University influenced his professional and personal lives.

Thank you for taking the time to speak with us.

My pleasure! Thanks so much for reaching out and taking an interest.

Where did you grow up?

I grew up in Westwood, near UCLA, in Los Angeles.

What was your Jewish education like as you grew up?

I attended Maimonides Academy (not to be confused with Maimonides School in Boston) for elementary and middle school, YULA for high school, and Yeshivat Har Etzion (Gush) for my gap year in Israel. In addition, my father is a rabbi and so I was, thank God, exposed to Jewish learning both in school and out.

What convinced you to attend Yeshiva College?

To begin with, YULA’s administrators and rebbeim were big proponents of YC, but more importantly, I knew by the time I graduated high school that I wanted to continue learning Torah in a serious way and that I wanted to go to college in an intensely Jewish environment that would not only nurture me academically but also foster my religious and personal growth. And what better place to do that, I thought, than YC?

What led you to continue your studies both with Revel and RIETS? Why both and not one or the other?

My interest in Jewish studies as an academic discipline was sparked by some of my first courses at YC, given by amazing faculty who knew how to get their students excited about the material they taught, and those early experiences inspired me to pursue Jewish studies as a major. As I neared graduation, I began taking classes at Revel as part of YC’s joint BA/MA program with BRGS, and it was around the same time that I decided that I wanted to continue learning Torah for several more years in YU’s semikhah program. (It must also be mentioned that in those days semikhah students were given a scholarship to attend Revel for free.) I briefly flirted with the idea of making my career in Jewish high school education but ultimately decided that my interests and skills lay elsewhere. Still, it was important to me, both personally and professionally, to learn lishmah—even if I did not have any real plans of taking a rabbinic position once I completed the semikhah program.

Can you recollect one or two experiences that would give readers a feel for the essence of your Revel experience?

I recall being consistently impressed by the course offerings at Revel, in terms of both their range and the quality of the faculty teaching them. I tried to take or audit as many classes as my schedule would permit, and there were several semesters when I found myself lamenting that I could not accommodate more. The other memory I have is of the sense of community created by Revel. The small class sizes and the extracurricular learning opportunities offered (lectures by visiting scholars, conferences, Shabbatons) helped us, the students and faculty, form professional connections and lasting friendships anchored by our shared intellectual interests. Those bonds, together with the education itself, are the most important outcomes of my time at Revel.

What led you to do your work as a writer, editor, translator, and Judaica consultant for Sotheby’s?

I first got involved in editing and translating during my years at YC while working for Kol Hamevaser, the Jewish thought magazine of the Yeshiva University student body. This work allowed me to hone my skills while publishing material in a subject area that was close to my heart. With time, I started editing for pay for some of my professors, and from there I began getting freelance jobs mostly by word of mouth. One person who deserves special recognition for his role in connecting me with Sotheby’s (and also with freelance work) is my dear friend and fellow Revel alumnus Menachem Butler. He introduced me to two of the key figures on the Sotheby’s Judaica team, Sharon Liberman Mintz and David Wachtel, both of whom have become valued mentors, colleagues, and friends in the intervening years. I began non-contractual cataloging work for Sotheby’s in 2015, ahead of the sale of twelve lots from the Valmadonna Trust Library, and started to formally serve as a consultant in 2017. In the end, then, much of what I do professionally today has its roots in the education I received and experiences I had during my time at YU.

What is the most satisfying thing you do in your line of work?

I feel lucky to be able to use my Jewish history training and language skills in my day-to-day professional life. The process of learning about the items we sell at Sotheby’s and then transmitting that knowledge to others, both in written (catalog) form and by putting on an exhibition of those items prior to the auction, is very satisfying. There are plenty of people who walk into Sotheby’s off the street, not knowing that there is a Judaica sale coming up, and when they wander into our galleries I get to introduce them to artifacts of Jewish history usually kept behind glass in museum cases or else tucked away in rare book rooms in university research libraries. Moreover, not only do I teach but I also learn, whether from a curious layperson’s questions, a knowledgeable librarian’s or scholar’s observations, a seasoned dealer’s valuable intel, or a collector-connoisseur’s keen eye. In the course of my work, in other words, I interact with both material and people that/who teach me so much about the past and, through the past, about the present and the future as well. And if, in the process, I am able to play some small part in creating knowledge and conveying it to members of the public, “such shall be my reward” (Gen. 30:32).