YU Unplugged is back… University GHG Emissions down by 4.4%

By On January 28, 2011 · Leave a Comment · In Eco Rep Projects, Events, Programs, Sustainability

On December 15th 2010, the YU EcoReps on Beren campus ran a daylong event focused on bottled water. Reps, Sophie Felder and Rachel Sussman chose this focus due to the student population’s heavy reliance on bottled water. Though both cafeterias at Stern College offer fountain drinks and have water fountains, the primary source of […] 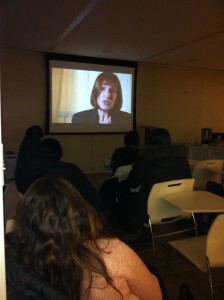 Felder and Rachel Sussman chose this focus due to the student population’s heavy reliance on bottled water. Though both cafeterias at Stern College offer fountain drinks and have water fountains, the primary source of water and other drinks are from the refrigerator cases that are fully stocked with Coca Cola products, including Dasani water.  Not only does Dasani come from municipal sources (read: tap water!) the plastic used to make water bottles becomes 3 billion pounds of plastic that pollutes the earth and overflows landfills.  In an effort to make the students of Stern College aware of the detrimen, they are causing to the environment, Sophie and Rachel took action.

On the day of the event both Eco Reps stood in the lobby inviting people to see if they could even taste the difference between tapped and bottled water. Though there were some savvy tasters, some could not spot the difference, but claimed that tap water wasn’t as healthy as bottled.

This of course is a common misconception that the EcoReps sought to combat with a nighttime showing of the movie “Tapped”. Accompanied by brownies and cocoa, twenty of so students watched the award-winning documentary detailing the bottled waster industry. Starting from the towns that are affected when big businesses roll in to use their water supply, and ending with the pollution when we’re all done drinking, “Tapped” gave a comprehensive and also frightening picture of what we do to our home planet when we don’t think. Many participants afterwards were inspired to start using reusable water bottles, knowing that they would be saving oil, space, money and their health in doing so.

In the next semester the EcoReps hope to provide more eco-friendly options in the caf. They have been speaking to food services and are interested in selling cheap Stern water bottles that students could buy on their caf cards and save money using. They have also suggested raising the prices on bottled water, or at least rewarding those who make the educated decision to be careful with their consumption. Look out for more changes coming your way!