University GHG Emissions down by 4.4% 2011 Earth Month at Yeshiva

Join the Topsy Turvy Bus on April 11th at 8pm on the Wilf Campus.

From early February through mid-April, the Teva Learning Center’s used-vegetable-oil-powered Topsy-Turvy Bus will be rambling through the Southeast United States, making stops at Jewish organizations and institutions in various communities.  This year’s tour is titled “From Purim to […]

Join the Topsy Turvy Bus on April 11th at 8pm on the Wilf Campus. 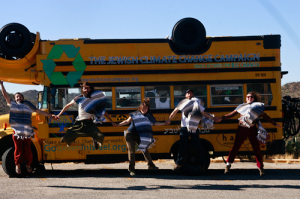 From early February through mid-April, the Teva Learning Center’s used-vegetable-oil-powered Topsy-Turvy Bus will be rambling through the Southeast United States, making stops at Jewish organizations and institutions in various communities.  This year’s tour is titled “From Purim to Freedom” and will be using themes from the holidays of freedom, leadership, commitment to change, the power of the individual, and miracles to spread Jewish ideas as they relate to energy and the environment.

“The kids thought the bus and solar oven were ‘really cool.’  I loved how easily and casually Jewish content was inserted into the environmental message,” said a Jewish education director from a stop on the last tour.  “The staff was able to adjust the information and activities to our youngest as well as our oldest kids.  They were incredible!” said another.

In 2009, Teva conducted its first bus tour in honor of Birkat HaChama.  The bus travelled throughout the Northeast and involved almost 1,500 learners of all ages and backgrounds.  That was followed in 2010 by a cross-country Climate Change Tour, with programs attended by almost 2,000.  Drawing on the success and excitement of the last two bus tours, the Teva Learning Center uses this unique and engaging method of travel to practice experiential education at its best.  “I was thrilled with every aspect of the program!  It was very interactive and kept my 8-9th graders engaged, which is no small feat!” said one participant from last year.

At each stop, the Bus Tour will run programs focused on science topics, environmental problem solving, and Jewish values.  Program participants will watch an interactive theater piece, build solar ovens, learn on a unique bio-fueled bus, among other events.

This year, the bus will travel through the Carolinas, Florida, Georgia, Pennsylvania, New Jersey and New York. Teva educators will share and engage participants in ways that they can take action and get involved with the Jewish environmental movement – which until now has been largely based in the Northeast and in California. Participants will be able get more information about the nation’s only pluralistic Jewish boarding school – American Hebrew Academy- and a new Jewish environmental summer camp –Eden Village Camp- and other Jewish environmental organizations. The tour is currently co-sponsored by American Hebrew Academy, Hazon, Eden Village Camp, The Jewish Farm School, The Shalom Center, Jewcology, Kayam Farm at Pearlstone Conference and Retreat Center, Isabella Freedman Jewish Retreat Center, and COEJL.

2 Responses to The Topsy Turvy Bus comes to YU