Recyclemania, the nationwide recycling contest, is conducted among participating universities over a 8 week period.

During this time, universities such as Yeshiva University step up efforts to recycle plastic, paper, cardboard and other recyclable waste products produced by the institution.  For their joint project, Jonah Keyak (’15) and David Goldrich (’15) chose to expand […] 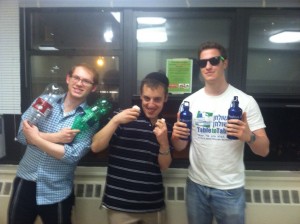 Recyclemania, the nationwide recycling contest, is conducted among participating universities over a 8 week period.

During this time, universities such as Yeshiva University step up efforts to recycle plastic, paper, cardboard and other recyclable waste products produced by the institution.  For their joint project, Jonah Keyak (’15) and David Goldrich (’15) chose to expand upon the existing event, bringing the recycling efforts and excitement closer to home.

To bolster the ongoing university-wide recycling efforts, Keyak and Goldrich created an internal competition between the different floors of the university residence halls.  Over an eight week period, from February to April, participating dorm buildings were evaluated floor-by-floor for their ability to collect recyclables encompassing plastic, cardboard and paper.  Recyclables were evaluated weekly, with the highest-recycling floors calculated by the end of the contest.  The prize for the lucky Morgenstern, Rubin or Muss Hall winners?  A Carlos and Gabby’s feast for the winning floor, and a Ben & Jerry’s ice cream party for the runner-up.

Keyak and Goldrich created the competition to run hand-in-hand with the larger university recycling efforts.  As Keyak put it, “We wanted to bring the recycling closer to home.  Our university produces large amounts of waste on a regular basis, and recycling is often neglected among students and staff alike.  While Recyclemania is a great way to get the whole institution involved in awareness and to ramp up recycling, we wanted to get students more involved, and give them a way to feel that they were contributing to the wide-scale efforts on a personal level.  Our contest allowed them to do so; the prize only incentivized efforts even more, leading to outstanding results.”

The going was not easy.  Various challenges presented themselves throughout the project, from coordination of recycling pickup with waste management facilities to proper estimation of recyclables produced on a weekly basis. Publicizing the event during an ongoing recycling campaign was never easy among YU’s busy student body.  Recycling receptacles had to be maintained (and unconfirmed reports of recyclable hoarding and theft were whispered).  But nonetheless, the duo felt that the competition was successful.

By Goldrich’s calculations, the contests’ participants managed to recycle over 8000 pounds of cans, bottles, paper and plastic over the duration of the contest.  “This is amazing, all things considered.  Most students eat and study outside their dorms.  That this amount of recyclables could be collected within their residence halls despite much of their day (and waste products) occurring outside only shows the enormous potential that students have to recycle.  Likewise, the trend of increased recycling shown over the weeks of the contest demonstrated students’ desires to get involved.  This competition proved that Yeshiva University students have it in them to care about important environmental causes, and can deliver when given the necessary tools.”

While the experience taught the two how much could be accomplished, Recyclemania as a whole also showed how far YU has to go. Much of the waste produced by the University consists of recyclables, and could be discarded appropriately if properly disposed of.  Keyak and Goldrich aim to continue the success by repeating the competition next year, and hope  to expand and diversify acceptable recyclables to include batteries, clothing, metals, and other waste products, if possible, while simultaneously expanding student participation.  The awareness and efforts promoted by their project should serve as inspiration for the student body in the future, and turn Yeshiva University’s Wilf Campus into a recycling and environmentally-friendly zone.  And of course, congratulations to Morgenstern Hall floors 3 and 2 on placing first and second, respectively, in the competition.