Quieting the Noise in our Lives to Find what Really Matters: My Reflections from the Rebbitzen’s Yarchei Kallah 2013 A Record Year for YUTorah.org

Yeshiva University’s Center for the Jewish Future announced today that its “Counterpoint Israel” winter break program, a 10-day mission that aims to empower Israeli teens from low socio-economic backgrounds, has doubled in size with the addition of four new “Winter Camps” in Kiryat Gat and the expansion of the existing program in Kiryat Malachi. 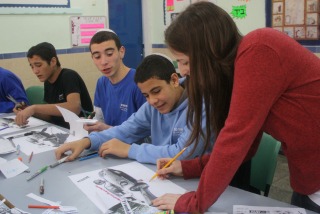 With the program returning to the community of Dimona as well, Counterpoint Israel will serve 850 teens in seven student-run camps January 9–19.

Throughout the mission, 42 YU students from North America, Panama and Colombia will guide the Israeli teens through a curriculum focused on English enrichment and self-exploration through art.

“Counterpoint continues to grow in size and expand its influence, impacting entire communities and changing countless lives along the way,” said Kiva Rabinsky, programs director of the CJF’s Department of Service Learning and Experiential Education. ”In both its summer and winter camp formats, Counterpoint fosters an environment in which young, underprivileged Israeli teens feel loved, accomplished and comfortable enough to open up to new people and experiences, and gives our YU students an opportunity to hone their leadership skills while taking on the roles of Jewish agents of change.”

With “Israel-Diaspora Relations” as the theme for the art projects and workshops, students at the Counterpoint camps will be encouraged to examine their Diaspora roots and develop a personal narrative based on their findings.

“Every student in Israel has roots in the Diaspora, but most of them have never had a chance to learn about where they come from. By taking this important introspective journey with counselors who are themselves from the Diaspora, the students will realize how much they have in common with Jews around the world,” said Aliza Abrams, director of YU’s CJF Department of Jewish Service Learning. ”This exercise is sure to open the eyes of the counselors as well, helping them understand just how much teachers can learn from both their students and the education process itself.”

When outside the classrooms, the YU students will become active in their respective host communities, working with youth at risk and running workshops for the parents of high school dropouts. The students will also broaden their knowledge of the Ethiopian community in Israel by interacting with Ethiopians involved in a special farming project that promotes self-sufficiency.

The Counterpoint Israel Winter Camps will be run with support from the Jim Joseph Foundation and Repair the World.

In addition to its Israel programming, the CJF will be running two other winter missions concurrently: Jewish Life Coast to Coast, an initiative that will analyze how individuals can become active and make a difference in North America’s diverse Jewish communities, operating this year in Cleveland, Columbus, Toledo and Detroit; and a week-long service mission to the Ukraine.