An evening with The Honorable Nir Barkat 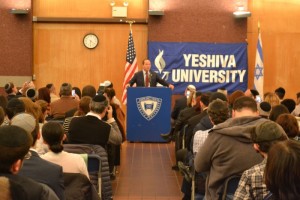 This article originally appeared and is courtesy of the YU Commentator

On Thursday evening, December 8th, Dozens of members of the YU community joined together in Weisberg Commons on the Wilf Campus to hear brief words from Nir Barkat, the mayor of Jerusalem. Barkat, Jerusalem’s mayor since 2008, was introduced by President Joel, who conferred an honorary degree upon the mayor at the annual Hanukkah Convocation and Commencement Ceremony.

“Mayor Barkat was chosen to keynote this year’s convocation in celebration of the upcoming 50th anniversary of the reunification of Jerusalem, and because of his many accomplishments, which complement YU’s own commitment to the safety and prosperity of the State of Israel,” said Matt Yaniv, YU’s Director of Marketing and Communications.

Asked how American college students could best contribute to the city’s growth, Barkat highlighted three areas in which he and Harvard Business School professor Michael Porter had determined the city has a competitive advantage that is being underutilized: tourism, health and life sciences, and the hi-tech sector. The mayor stressed that Americans could make significant contributions in the latter two areas.

“So, we have defined what we call the culture tours and business cluster. We market Jerusalem as a place where kings and prophets walked, where you can come to the holy sites, and to the religious sites, and to the archaeology and history, but also complement that with culture, and shows and significant fun when people come to our city. And we’re scaling very nicely. There are lots of opportunities in that framework.”

The mayor was equally optimistic about the recent boom in hi-tech the city has experienced. “…We realize that we are very powerful, and have a lot of potential, in health life sciences and hi-tech,” he said. “As a hi-tech entrepreneur, I know the power of the Hebrew University, and the different colleges we have. Hebrew U is top in the world in in generic research in health life sciences, top ten in mathematics and computer science, yet we weren’t keeping talent in the city. So we created a very interesting ecosystem for entrepreneurs. Time magazine 2015 defined Jerusalem as the number one emerging tech city in the world. We grew from 250 companies less than four years ago, to over 600 companies in Jerusalem, and we’re scaling at a rate of over 120 a year. Now a lot of those opportunities are young start-ups, young companies…, We’re creating that ecosystem for young companies to become successful. And I think they need lots of skilled labor, lots of skilled management, people that understand the U.S. market, I think it comes with an advantage.

Many students were pleased with the mayor’s remarks.

“It was wonderful to hear such optimistic words from Mayor Barkat,” said Maxwell Charlat, a first-semester biology major. The mayor described some of the amazing economic, social and cultural advancements in Jerusalem since he was first elected in 2008. Barkat is hopeful that Jerusalem will continue to flourish and grow into the thriving capital that Israel deserves.”

Math and computer science major Shalom Azar concurred. “I was very impressed by Nir Barkat’s points on having the right for Jews to build throughout Israel. Whether one believes the two-state solution is the best solution or not, we cannot ask someone what their race is to give them a building permit. No place in the world has that law.”

Rabbi Brander, Vice President for University and Community life at Yeshiva University, commented, “Yeshiva University is the only university where the mayor of Jerusalem can visit and be welcomed by students warmly without any concern of protest. Our students heard the Mayor’s message about the wonderful positive changes in Jerusalem and the opportunities that are available for our students in our holy city. It has become tradition that when the leadership of the Israeli government is in New York they come to YU to engage with our students”.