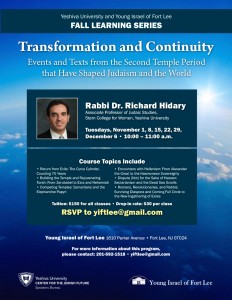 In a similar model to the Community Beit Medrash, the Young Israel of Fort Lee has been running their own scholarly lecture series in conjunction with the CJF. This past semester, in its’ inaugural program, Dr. Daniel Reinholz discussed the Rambam’s guide to perplexed in four enlightening sessions.

The greater vision for the program is that the Young Israel of Fort Lee will become somewhat of a template for other communities to host similar programs. With Fort Lee’s large retirement community, the program has become a version of a “university”, for retirees. Participants in the past program noted that they wanted to be in an intellectually rich environment, and were happy to hear lectures with a broad focus in this past session from Jewish History professor, Rabbi Hidary. Individuals attending have had lifelong experience which can often times drive their questions lending to more complex and mature discussions.

The program runs for four weeks, and the upcoming semester will be the third semester of the program. There are hopes to make the program larger, with an expanded summer and fall semester. In addition to being great for the participants, this program allows for the CJF to cultivate stronger relationships with the greater community. As a community driven program, YU is a proud partner with Rabbi Zev Goldberg, rabbi of the Young Israel.

The program really initiated when a number of retirees in community were looking to hear from high-level scholarship without having to cross over the George Washington Bridge. Since Yeshiva University is known to be the address for high level scholarship, the community teemed up with YU to have this program on their own turf where they could bring someone in to teach graduate level courses to the shul. The community members note that they have been very inspired and that the program exceeded so many of their expectations.

Rabbi Goldberg noted that is has been an honor to bring in the YU/RIETS experience to his community and to be able to expose his congregants to the exceptional scholarship of an institution that he is so proud of.