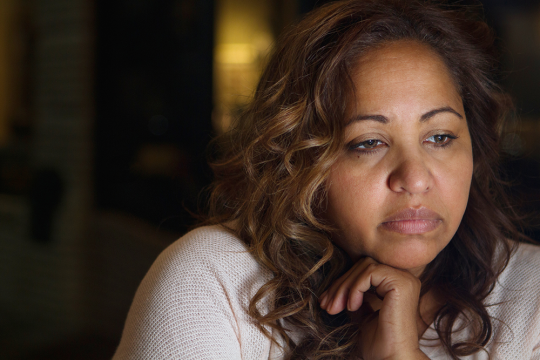 Today was certainly calmer than the preceding two days. There were fewer women and children coming to the visitor’s center where the legal staff, law students and social work team have their work space. We have begun to get a rhythm down and have a better understanding of what needs to be done and why.  Domenica and I conducted two mental health evaluations together today. One was for a woman who had been given a positive decision by the AO and was going to be released with her daughter. The problem is that the decision came down 13 days ago and yet the woman is still be detained. This is apparently unusual and although there doesn’t seem to be any danger that the decision will be reversed, the legal team wanted an assessment to be able to assert that the woman was under unreasonable mental duress and stress waiting to be released.

This interview was different than others we’ve conducted in that it is not focused on past trauma but on current daily life in the detention center.  We learned some interesting details about life in the South Texas Family Residence.  The women live five or six to a room with their children. There is a communal bathroom in each area of five or six rooms. They sound like they are probably like college dorm bathroom with several showers and stalls. Nevertheless, it sounds like as many as 72 women and children are sharing one bathroom. There is a communal dining room where the women and children take their meals.  And the children attend ‘school’ on site where they seem to be doing some pre-school activities such as learning their letters.  The medical care seems to be limited. Practically everyone in the visitor room at any given time is sick and the children are constantly coughing. Notes in some of the client files show that it can take days to get an appointment with a doctor.

When we asked our client about conditions in the center and in the holding cell where she’d spent the first two nights after being detained, the first thing she mentioned is that they had food and she had a place to sleep.  This got Domenica and I both thinking about differences in our perceptions vs. those of our detained clients.  While from our perspective, the detention center and everything that’s associated with the practice of detaining families looks awful and is abhorrent, from the perspective frightened, desperate, traumatized women who have no idea where they are or what to expect the fact that they have food and a place to sleep can seem nearly miraculous.

Later in the day, we did our second evaluation. This woman is scheduled for her Credible Fear Interview tomorrow and the attorney working with her didn’t have a solid enough narrative to feel confident that she’d be released from detention.  After some excellent and valuable coaching from one of the staff attorneys, Domenica and I spent about 90 minutes helping this young woman frame her story in way that will hopefully result in a successful outcome.  This woman cried for literally the first thirty minutes of the interview and tearfully told us a story of her father’s alcoholism, verbal and emotional abuse towards her and her mother that went on for most of her child hood and continued into an abusive relationship with her husband’s mother. Working with the information I received from the staff attorney that included both background information about our client and information about cultural issues in Guatemala, Domenica and I were able to tease out the details of a story that essentially amounts to a life-time of abuse.

The one bright spot and hope in the story is that she and her husband have a good marriage and while she is currently apart from her husband, unbeknownst to her, she found out from the uncle who is going to sponsor her in the U.S. that her husband is now living in the Midwest with their five-year-old son and she will likely be able to join him with their four year old daughter upon release from the detention center.

For Domenica, the past couple of days have been a wealth of learning experiences and has pushed her boundaries out her comfort zone. She took the lead on conducting an assessment yesterday and we are working on the write up of the report. She is very skilled at reading through the documentation for a client prior to the evaluation and then going over it with me to high light important areas to explore in greater depth. She is very tuned in to clients and their children and has identified important and easily over-looked points in several stories.

As day three comes to a close, we are still writing reports and meeting with law students to prepare for the Credible Fear Interviews coming up tomorrow.