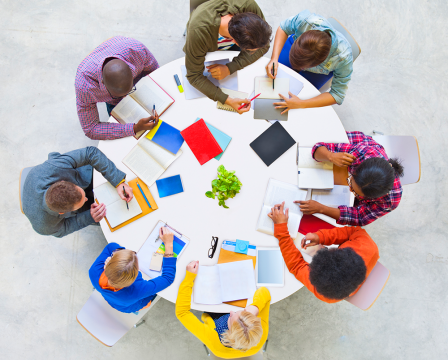 One of the customs among the Dilley On The Ground (OTG) team is to do what they call “Big Table” on Monday and Thursday night each week.  This gives the week’s group of volunteers an opportunity to process some of what they experienced.  On Monday night, it was right after day one.  Nate, the project manager asked everyone to talk about what struck them that day.  We were all so shell shocked and overwhelmed by what we’d seen and the volume of women and children being held in detention. By tonight, when we had the second Big Table, Nate asked us to go around and share a “low” moment, a “high moment” and then he would talk about ‘taking it forward’ in other words continuing to be involved in the work at Dilley and becoming advocates for ending the mass detention of women and children.

By this point in the week, all of the law students, staff lawyers and the social work team have gotten the rhythm down of conducting the Intake Charlas, the CFI prep Charlas, the CFI prep sessions, Release Charlas and the mental health evaluations.  “Charla” is the Spanish word for chat or informal talk. All day long in the middle of the large visitation room there are two circles of chairs operating four or five times per day. The number participating in the talks varies anywhere from 5 to 25 at a time. The intake charlas are an overview of the detention process and what the women will be doing with the attorneys to try to get released from detention as quickly as possible.  The CFI prep charlas explain to the women what is involved in preparing them for the interview with the asylum officer which, if successful, is their ticket out of the detention center. And the release charlas are for the women when they are ready to leave the detention center and go to their family or sponsor (this is the happy charla!).

As we went around the room, there was laughter and tears as we shared the funny, tragic, poignant and victorious moments we’ve shared with the women we’ve served over the past few days.  The Cardozo law students are incredibly dedicated, smart and determined to help their clients. We soaked up the pleasure of a victory and wept over the cases that were either too tragic to bear or not strong enough which means the woman is facing deportation back to a dangerous and untenable situation in her country.

Domenica and I both spoke about a particularly difficult evaluation we did today with a mother and daughter who’d been the victim of gang extortion in Guatemala. The young daughter, now 17, had been shot in the ankle by gang members because her mother got sick and missed a monthly payment to the gang.  As we were talking about the story, the daughter went in to a full blown re-traumatization and panic attack. Her breathing became shallow, she was hyperventilating and she seemed to dissociate.  Her mother, already distraught and upset about telling the story of the extortion became inconsolable as she watched her daughter decompensate.  In this situation it was imperative to calm the young girl and help her to get back into her body and in the moment by helping her get grounded.  While Domenica held her arm and comforted the mother,  we were able to bring the girl’s attention back by having her place her hands flat on the wood table, her feet flat on the floor. I asked her to look directly into my eyes and breath with me deeply and slowing.  Between her mother, Domenica and myself we were able to bring her back into the room.

Clearly, we couldn’t continue the meeting with the daughter in the room. Domenica stepped out into the waiting room with her while I concluded the discussion with her mom.  When we finished and opened the door, we found the daughter laughing with Domenica and drawing on a legal pad. She drew a very nice portrait of Domenica (totally recognizable as her!) and a beautiful heart with the words “Dios, te amo” God, I love you, written inside.

Domenica and I are flying home tomorrow. So for us this is the last day of our experience here in Dilley.  But as Nate spoke about in the second half of the Big Table, now we have to think about how to continue the conversation, bring awareness about the fact that large numbers of women and children are being detained every day, and advocate to end this practice.  Nate shared an interesting statistic.  The success rate for getting women released from Dilley with a positive outcome is currently 98%. That means that most of those women have a strong enough case of persecution that they are released to a sponsor in the U.S. and will be allowed to go forward in the asylum process.  His question is:  if 98% of the women are being released anyway, why are they being detained for days and weeks at time in the first place? And why are million and millions of tax payer dollars being spent on privately operated detention centers?  Hopefully we can keep the conversation going.