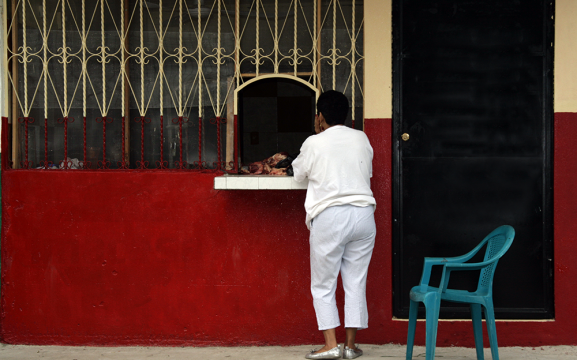 Day two, incredibly saw more incoming refugees than day one. The legal staff, law school students and social work team worked together efficiently and we were able to respond to a multitude of needs presented by the ladies and their children.  Chief among them is the preparation for the Credible Fear Interviews (CFI) that each lady must have with an asylum officer (AO) prior to either being released into the custody of a family member, friend or receiving refugee organization (a positive outcome) or being referred back to the legal team ( a negative outcome) to explore in greater depth the persecution and trauma that led to their decision to flee their home country.

These RFRs as they are referred to here, require the social work team to conduct a psychological assessment to determine what underlying mental health issues may exist and to help strengthen the narrative of the trauma.  In addition the legal team works with the woman and often her children to literally rehearse the telling of their story in a way that strongly represents the persecution they experienced, its effect on their safety and well-being in their home country, the reason why they needed to flee and the fact that it is not safe for them to return. This can be a daunting task requiring patience, persistence as well as compassion and gentleness as these women and children have been traumatized multiple times. Not to mention the fact that they are living six women with their children to a room among strangers in a detention center in a country that is completely unknown to them.

One story from yesterday particularly stands out for me.  One of the law students asked me to help her with a woman from Guatemala who is with her 12-year old daughter. Guatemala is over run with gangs who terrorize communities and intimidate local law enforcement as well as drug dealers who approach young children, generally girls around the age of 12-14 and compel them, by threatening to harm or kill their families, into selling drugs in their schools and communities. Such was the case with our client.  The law student had been unable to help the woman tell her story in a way that would have provided strong enough evidence of persecution for the AO to release her and her daughter.  Our job was to help her tell her story.

The woman spoke repeatedly of her lack of education and inability to stand up for herself with the AO. Her young daughter wept inconsolably despite her mother’s repeated assurances that “Dios esta con nosotros,” God is with us. The law student pursued her line of questioning to gain deeper understanding of the extreme poverty of their town, the lack of services and resources and the inability or unwillingness of local law enforcement and government to protect and serve the community.  Yet she was unable to help the woman offer up the necessary details of her story in a way that would be convincing enough.  It was also important to interview the daughter to understand the details of the drug dealer’s approaching her and threatening to kill her family if she didn’t do what they wanted.

It is here that social work skills and legal skills come together.  Working together, the law student and I were able to calm the mother and young girl. I started by drawing on the mother’s repeated refrain to her daughter “Dios esta con nosotros” and asked her if she belonged to a church in her town. She did and I asked if there was a prayer she could share with us.  This woman stood up, closed her eyes and proceeded to deliver a three or four-minute petition to God that would rival any charismatic preacher. With tears in all our eyes, she sat down and I said to her I am 100% certain that God is with us.  Similarly, we were able to calm the daughter down simply by asking her to talk about a day in her life in her home country.  Speaking about the normalcy of her life in Guatemala took her back to a more secure and happier time. She began to speak freely and with little prompting from her mother told us about her life.  When she became engaged in speaking to us, I asked if it would be ok to talk about some other subjects. She gave her assent and the law student was able to help her formulate a narrative for the interview.  Throughout the rest of the session, I continued to focus on reminding the mother that she is the expert on her own life and she is in the role of teaching the AO about her life, her town, and why she and her daughter needed to flee.  You could clearly see as the meeting progressed that the woman was able to find her inner strength and use it to protect herself and her daughter.

I later learned that her interview was successful and she and her daughter will likely be released. This is one small example of the multiple times per day that the law students, social workers and legal team are working together to help these women move through the first stage of the many steps towards their new life.