The Effects of Media on Adolescents 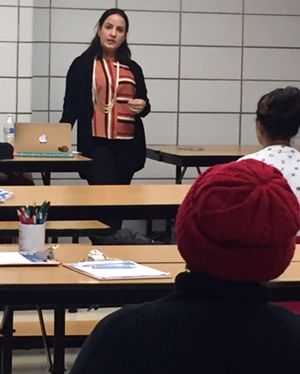 On Dec. 20, 2018, Carolina Herrera presented “Media Influences on Adolescent Development” in Spanish to the parent community at IS528 Community School (located at 180 Wadsworth Avenue) as part of the Wurzweiler School of Social Work’s Care Cafes on Parent Engagement series.

Her presentation focused on the significant increase in children’s use of media through handheld electronics and streaming websites and the relationship between exposure to certain types of media and child behavioral symptoms.

Her presentation was well received by the parents in attendance, who engaged in small-group discussions and role-playing activities to learn more about the issue and to find out what they could do to modulate their children’s exposure to media in general and to specific media content.

Ms. Herrera obtained her bachelor’s degree at Florida State University, completed a Master in Social Work at Columbia University, then worked as a clinician with high-risk adolescents for several years in New York City. She is currently a fourth-year doctoral candidate in psychology at Rutgers University in Newark. Her research focuses on adolescent development, specifically regarding media influences and/or trauma and pathological adaptation. She has contributed to publications on adolescent development and high-risk behaviors in youth and has written a chapter in the upcoming edition of The Oxford Handbook of Clinical Child and Adolescent Psychology.