ACE-ing the Class The Welcoming Committee 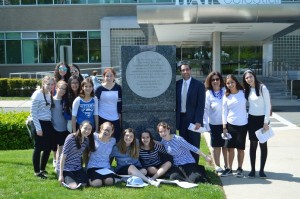 This week’s back-to-back occasions of Yom HaZikaron and Yom Ha’Atzmaut brought our ever-present connections with Medinat Yisrael to the forefront of our minds. On Wednesday, we were fortunate to host two veterans of who have helped to defend the State of Israel: Sgt. Sidney Rabinovich, grandfather of Mrs. Aliza Gewirtz and Miriam Rabinovich (‘17), who fought in the 1948 War of Independence; and Adam Kugelman, a Lone Soldier who joined the Israeli Army after his two years of post-high school Israel study. Both stories captured the difficulties and personal rewards of defending Israel, and enhanced our appreciation for the IDF and Jewish people’s capacity to defend ourselves. Our Yom Ha’Atzmaut celebrations began bright and early as a blue-and-white-clad study body davened together, saying Hallel on our lawn in a unified circle. After a scrumptious Israel-inspired breakfast, students split up to attend sessions prepared by our faculty. Topics ranged from “Girl Power: How Women Impacted the State of Israel,” to “Rav Kook: Rebel with a Cause” to “Halakhot of Hallel on Yom Ha’Atzmaut.” 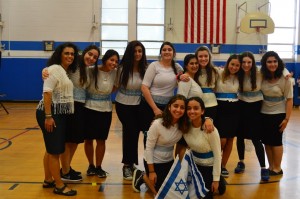 Rabbi Elie Weissman‘s group visited 1111 Marcus Avenue, former home of the United Nations and site of the 1947 Partition Plan.  Following a celebration of Israeli film, we were treated to a showcase of “Israel Through the Arts,” with special performances from our students and faculty. Sophomores in Mrs. Naomi Bennun, Mrs. Ofira Bashiry, and Mrs. Osnat Laks’s Ivrit classes entertained us with a beautiful daglanut, followed by a dance from our Israeli Culture Club and a performance from our Stomp Club. Thank you to the faculty members who contributed to writing and presenting a skit about the importance of unity among the Jewish people. After a rousing chagigah and falafel lunch, the school celebrated Yom Ha’Atzmaut the “Israeli way”–with a Macabiah that inspired students of all grades to work together toward common goals. Thank you to our entire programming team for a successful and spirited celebration of Medinat Yisrael!