The Chesed Corner A Central Sukkot 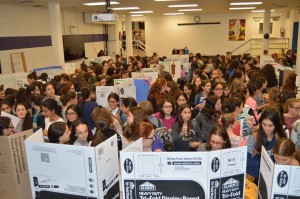 “Central” to the educational philosophy of Yeshiva University High School for Girls is the commitment to educate the whole student, recognizing each girl’s interests, strengths, and unique contributions to the school community. At the recent annual Club Fair, students had the opportunity to learn about Central’s robust extracurricular offerings, finding clubs that appealed to their innate proclivities and others that sparked curiosity and newfound interest. A student may have found herself drawn to one of our many academic clubs, including Debate, Mock Trial, or College Bowl. Perhaps she wished to learn about our numerous chesed opportunities, such as Adopt-a-Bubbe, NCSY Jump, or Yachad. If Israel is her passion, she may have looked into the Israeli Culture Club or the Israel Advocacy Club. If engineering struck her fancy, perhaps she opted to look further into the Central chapters of Girls Who Code, ACE (Architecture, Construction, and Engineering), or L’vnot, the new Stern-run STEM group that has invited our students to learn more about coding and robotics. Her creative spark may have pulled her to sign up for one of our performing arts clubs, including Choir, Stomp, Dance, or the award-winning Poetry Team. At Central, the opportunities are endless, and there’s something for everyone.

At each year’s Club Fair, the catalogue of club offerings expands thanks to the initiative and passion of Central’s many student leaders, who take ideas for new clubs and build them into fruition. One such example is the TED Talk club, the brainchild of juniors Yael Laks, Leeba Sullivan, and Dodie Lee Weinberg. Dodie shares that the three friends were discussing the merits of focusing on academic achievements, often at the expense of other character-building and potentially more valuable experiences. They then discovered a Ted Talk by New York Times columnist David Brooks that addressed the precise issues they had been discussing. Says Dodie, “We were amazed to find a person speaking about the exact issue that we were grappling with, and we found that after hearing Mr. Brooks’s opinion, our conversation lengthened and deepened. And then we said, ‘We should do this more and with more people.’ So we created this club!” At the beginning of each week, club members will email a link to a TED Talk with a prompt. In an attached Google document, participants can respond to the prompt and to each other, delving more deeply into the videos’ topics and setting the stage for reflective in-person discussion periods. 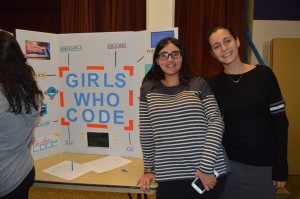 Also looking to encourage fellow students to flex their linguistic and intellectual muscles are Shlomit Ebbin (‘18) and Hila Karol (‘18), founders of the brand-new Bananagrams Club. Says Hila, “Shlomit and I realized that a lot of people in the school really enjoy playing Bananagrams, and people would always want to join in if we were playing during school. The goal of our Bananagrams club is to sharpen certain skills, such as fast thinking and vocabulary, to help people improve at the game. We can’t wait to get some practice soon, and hopefully one day we can expand and compete!” Shlomit and Hila intend to gauge interest in Bananagrams in other schools and hope to establish an official Yeshiva Bananagrams League.

Recognizing that as fun and exciting as Central can be, school can sometimes be hectic and stressful, Nily Baratian (‘18) and Dana Komsky (‘18) have started ClubMed, a monthly club that provides a 40-minute period of stress-free relaxation. Says Dana, “Since school can be very stressful, ClubMed will be here to help calm the mind and get it back in focus. Students will leave their school bags and phones behind and join the open meditation circle! We will do activities such as yoga, stretching, breathing exercises, nature walks, and more ideas to come.” During their first meeting, participants will get to know one another as they make stress balls. The club already has over eighty-five members, and the founders extend a welcome to anyone else who is interested! 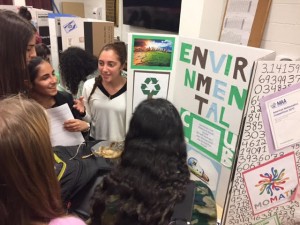 After Emily Zrihen (‘19) began to learn about graphic design and Geofilters, she began to consider potential applications to enhance the school community. The Geofilter Design Club was born with the purpose of creating Geofilters throughout the school year to correspond with Central’s multifaceted events calendar. “The members of the club will learn about how to make Geofilters in a social and fun way, while learning about graphic design and Photoshop-like software,” says Emily. “Members will then be asked to submit designs and ideas based on the upcoming school-wide events. All Geofilters created and accepted will be available for use to the anyone in the building throughout the day on the Snapchat app.” 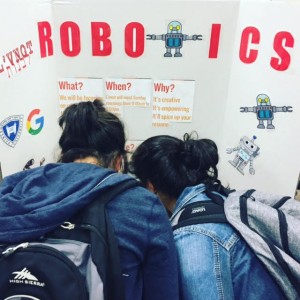 The Innovation Club, spearheaded by Sarah Harris (‘18) and Yael Yehoshua (‘18), will ask participants to consider practical problems and develop meaningful solutions through the use of design thinking and innovation. By way of example, Sarah explains that Mrs. Karoll wanted a way for her door to remain open so students would be able to walk in and out of the STEM lab more easily. One student developed the solution–3D-printed door stoppers in various shapes and colors!

Liat Cohen (‘18) and Yael Kirschner (‘18) were inspired by the Humans of New York series to highlight the uniqueness in our school. Humans of Central will be an opportunity for students and faculty to share their funny and/or inspirational stories through a series of interviews. Says Yael,  “Most of the club’s work will be posted on social media, and hopefully by the end we will be able to also produce a book featuring different students’ work!”