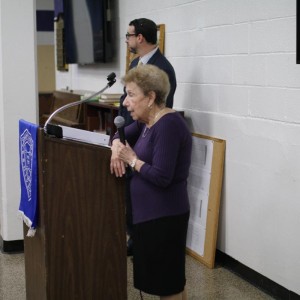 On Thursday morning, November 9th, in commemoration of the anniversary of Kristallnacht, the entire student body was privileged to hear from Mrs. Edith Himmel. Mrs. Himmel was a twelve-year-old living in Vienna when she personally witnessed the horrors of that harrowing night. Her father was taken by the Nazis and sent to Dachau, and the Nazis raided and looted her home. She was fortunate to make it to New York with her entire family seven months later, though some members of her extended family did not make it. Her honesty, sincerity, and candor left a mark on all of our students as they took in the magnitude of Kristallnacht.