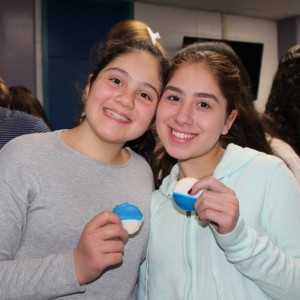 This past month, we have had advocates and Torah scholars teaching our students about Israel’s past and the role they need to take In Israel’s future. Wednesday, November 29th, we concluded our celebration of Zionism month by commemorating the 70th anniversary of the UN vote for the Partition of Palestine and watching the documentary, “November 29, 1947: The Story of a Vote”. One of the most powerful lines in the documentary was “We were no longer the object of history, now we became the subject of history”. The assembly continued with a powerful message by Ms. Miriam Borenstein who connected this week’s parsha to the powerful movie, and a call for students to find what their role is and what action can they take to keep Israel a Jewish sovereign nation. The assembly concluded with the singing of Hatikvah, the Star Spangled Banner, and reciting perek 126 of Tehillim.