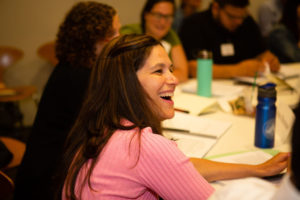 During the week of July 29th, Central’s Associate Principal Beverly Segal and History Department Chair Audi Hecht joined educators from 14 Jewish and Catholic middle and high schools from New York, New Jersey, and Los Angeles to attend the Civic Spirit Summer Institute, an intensive civic education training conference. Central/YUHSG is a vital member of the pioneering first cohort of faith-based schools revitalizing civic education across the country. This coming school year will celebrate Central’s second year in the Civic Spirit program to reinvigorate civics education for modern demands. At the Institute, teachers and administrators delved into primary sources and engaged in rich conversation on teaching the principles of American democracy, civil discourse, and responsibilities of citizenship in the context of a religious community with varying political and philosophical views. The educators learned with political philosophers, historians, curriculum specialists, and literary scholars. Mrs. Hecht also had the opportunity to continue her summer learning at the Educator’s Institute at the National Museum of American Jewish History in Philadelphia, which focused on integrating Jewish history into the American history curriculum. Seminar and workshop topics included America’s Jewish women, American Jews and the Civil War, and contemporary Jewish problems, as well as skills such as object-based learning, taking oral histories, and document analysis. Ms. Elana Kook, of the English Department, also attended a professional development summer workshop, this one led by the Royal Shakespeare Company at the Horace Mann school in the Bronx. She shared her experience: “Former Shakespearean actors hailed all the way from Stratford, England to show us how to present Shakespeare to our students as it was meant to be experienced: on the stage. Along with English and theater teachers from other private schools, we engaged in interactive activities that exemplified how we can transform our classrooms into our own mini Globe Theaters. These activities challenged us to use our minds, bodies, and voices to interpret and break down the complex language of Shakespeare, which is often a daunting task for many students. I can’t wait to read Romeo and Juliet with the freshman class this year and watch them turn into Shakespearean actors!”
If you enjoyed this article, please consider sharing it!