This year’s 25, 40, and 50-year reunion classes had a daylong event on May 30th that began with the undergraduate Commencement ceremony, continued with tours of the Wilf and Beren campuses and culminated in a gala dinner at the Grand Hyatt in Manhattan. View photos here.

The theme of legacy families was repeated throughout the evening and this years’ classes had many examples. In attendance were Hermine ’63S and Nathan Diament ’88YC, who were profiled in last month’s e-newsletter here and David ’63YC and Mark Zomick ’88YC as well as many who had children or grandchildren, nieces, nephews, brothers and sisters graduate from YU that very morning.

The day kicked off with breakfast at the IZOD Center in New Jersey before the Commencement ceremony. Alumni marched in cap and gown taking seats on the stage to watch the newest members of Yeshiva University alumni graduate. Ben Englander ’88YC and Rabbi Zalman Levine ’88YC took great pride in joining their sons on stage as they received their diplomas.

The members of the Class of 1963 received special recognition from President Joel who reissued their diplomas. Felice Paley ’63S and Martin Braun ’63YC accepted the diplomas on behalf of their classes.

“It was really thrilling to be a part of the graduation,” said Sheila Schneider’63S, a retired teacher whose husband, Shelly, joined her for the day. “I have such fond memories of my time at Stern and it was wonderful to be back and participate in that way.” The Schneiders’ two daughters, Meria Atik and Arona Beorw, both graduated from Stern College. 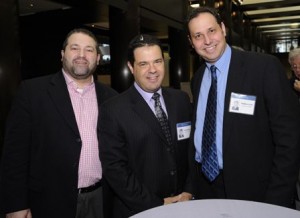 Tours of the Wilf and Beren Campuses offered alumni nostalgic twinges and the chance to see firsthand some new additions and renovations to both campuses. In the evening, they were joined by their classmates for a dinner celebration at the Grand Hyatt in Manhattan where there was much excitement as guests recognized long-lost faces, but many alumni said they remained close friends with their peers to this day. 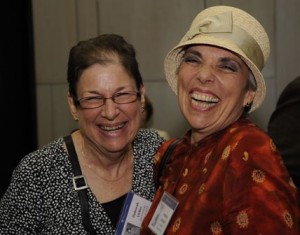 Linda Sandel and Deborah Kahn, both graduates of the class of ’73, formed a close friendship at Stern and are still good friends. “The dorm life was an outstanding part of Stern,” said Kahn, “and there were so many wonderful professors, like Chaya Orlian a
nd Peninah Schram.” All of Kahn and Sandel’s children graduated from YU schools. “We both just have an incredibly positive association with YU,” Sandel said.

Abraham Aufruchtig and Zev Leifer, both graduates of the class of ’63, needed no re-introduction – because the two are cousins. Aufruchtig’s favorite part of YC was the dorm life, while Leifer said the synthesis of the college and the Beit Midrash was the real draw for him.

Following dinner, a program emceed by Elaine Witty ’88S, ’91C, who emphasized the specialness of YU as a legacy school and the pride they all should feel in their multiple YU connections, featured a Dvar Torah by Dean Karen Bacon and remarks from President Richard Joel. David Zomick ’63 spoke on behalf of the 50th reunion class sharing a poem that was both humorous and nostalgic. He was followed by Joseph Stechler ’73YC who offered a touching tribute to his time at YU, emphasizing his warm feelings toward the school, which have grown since his graduation.

Members of the Classes of 1963 and 1973 were inducted into the Silver and Golden Shield Society and received their commemorative pins and a certificate. The program concluded with the presentation of the Reunion Class Gift, led by Izzy Kaufman ’88YC, to President Joel of more than $108,000 for scholarships.

But there is no reason for alumni to wait until milestone reunions to stay in touch. As Mark Zomick ’88YC, who majored in communications and currently works in advertising, said about keeping in touch with friends, “Facebook makes it much easier to see what my classmates have been up to.”