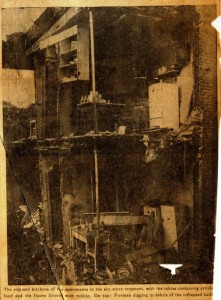 Note the refrigerators in the photograph. The advent of modern electric refrigeration is the primary factor in the end of the era of the large-scale ice business and the closing of the Knickerbocker ice plant.

On December 12, 1946, Yeshiva students were stopped by police blockades on their way to school.  Although everything appeared normal, a disaster was unfolding. An explosion and fire at the abandoned Knickerbocker Ice Plant on Amsterdam Avenue near 184th Street had caused a wall to collapse, crushing the back of a neighboring apartment building.  Police and firefighters were frantically searching for fifty missing men, women, and children, presumably buried under the rubble. The tragedy ultimately claimed thirty-seven lives, and is listed in the Encyclopedia of New York City (2010) as the eleventh worst fire in New York since 1898. The majority of the residents of the apartment building were parishioners at St. Elizabeth’s Roman Catholic Church on 187th Street and Wadsworth Avenue, and most of the funerals of the deceased were held there. According to the United Press, the fire was set by two “dead-end kids” who bragged that they started “one hell of a fire.” The New York newspapers were full of heart-wrenching images and stories of funerals of parents and children. Reporters highlighted the gaily wrapped gifts and greeting cards mixed with debris, scooped out as the rescue work went on, mute testimony to the “hell” the “dead-end kids” had wrought. 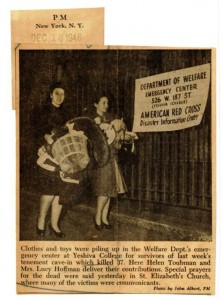 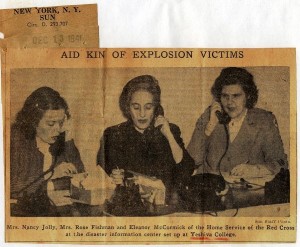 Dr. Samuel Belkin, President of Yeshiva, immediately responded to the crisis and turned over Yeshiva’s sole building at the time (now the high school) to the New York City Department of Welfare and the Red Cross for an emergency headquarters and space to shelter the homeless. Students gave up their beds. The Yeshiva cafeteria provided food. “Distraught women with their crying children were given assistance by officials of the University. During the day, families and friends of the victims appeared at the Headquarters for information and assistance.”  Neighbors brought in clothes, shoes, and toys. Yeshiva’s facilities were used for about a week until the Department of Welfare was able to relocate those whose homes had been destroyed. Although funds were offered to Yeshiva University for its services, Dr. Belkin announced that Yeshiva would not accept anything. He declared that any money sent to Yeshiva would be turned over to the Department of Welfare. Yeshiva University Archives holds letters from the Department of Welfare and the Red Cross thanking Dr. Belkin and Yeshiva University for their service. 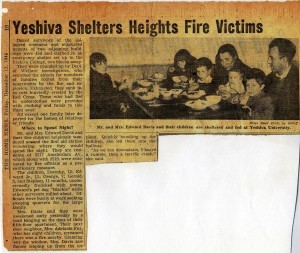 The Commentator published an editorial entitled “Good Neighbor Policy” on December 26, 1946, and stated: “It is with great pride that the student body compliments Dr. Belkin and the administration of Yeshiva University for a job well done, both in the spirit of the Jewish heritage and in the best traditions of Americanism.” Thus just prior to Hanukah in 1946, Yeshiva University had the opportunity to be an “or la-goyim,” a light to the nations. 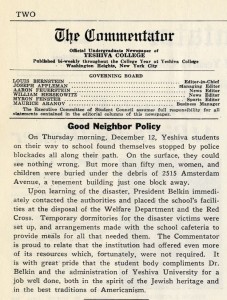 Today Tenzer Gardens and Rubin Hall stand on the site of the Knickerbocker Ice Plant.  The apartment building adjoining the ice plant at 2515 Amsterdam Avenue was almost completely destroyed by the fire and condemned, and even the adjacent building at 2517 Amsterdam Avenue was declared unsafe.  The former residents of the buildings dispersed and tried to rebuild their lives; some of them have contacted Yeshiva University Archives over the years for information about the tragedy and continue to express gratitude for the University’s help at the time.  On the seventieth anniversary of the fire, it seems fitting to remember what was here before us, in those days, at this time.