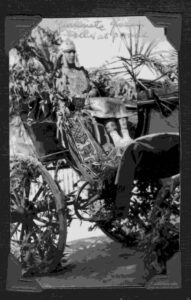 This photograph of the  “Yemenite Queen Esther” in the Tel Aviv Purim parade in 1929 is from the Schussheim Family photo album, a pictorial record of the  family’s travels in Palestine in 1929. No mere run of the mill tourists, Rabbi Morris Schussheim (1895-1970) of Providence, Rhode Island, his wife Mary (née Chipkin) and their two daughters, Israela and Ruth,  traveled to pre-State Israel in order for Rabbi Schussheim to study for a year.

The photographs document, in striking black and white images, the high points and achievements of pre-State Israel, such as the famous Tel Aviv Purim carnival, an event which drew tourists from all over the country to Tel Aviv. A Yemenite group, Tze’irey HaMizrakh, was always a highlight of the parade.

The public Purim parade in Tel Aviv was cancelled the following year, in 1930, as a result of the Hebron massacre in the summer of 1929. Rabbi Schussheim, whose master’s thesis was entitled “The International Political Situation in the Time of the Prophet Isaiah” must have understood the political and security considerations which affected the public celebration in 1930.  The carnival and parade resumed in 1931 and in 1932 the event became known as  Adloyada,  when a contest to create a Hebrew word for “carnival” was held. The term Adloyada was the brainchild of  noted Hebrew author Y.D. Berkowitz (son-in-law of Sholem Aleichem and his Hebrew translator). The new coinage was based on the Talmudic statement  (Megillah 7b) by Rava, in Aramaic,  that on Purim a person should drink to the point where they are unable to distinguish (ad delo yada)  between “Cursed is Haman” and “Blessed is Mordechai.”  The Adloyada festival continued through 1935 when it was no longer financially and politically feasible to maintain. It was revived in 1955, after the establishment of the State of Israel.

Enjoy the photographs of floats and participants in the parade, as well as those of spectators, including Israela and Ruth Schussheim. 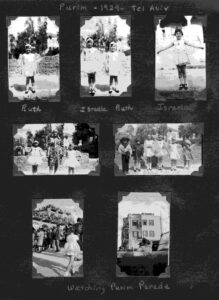 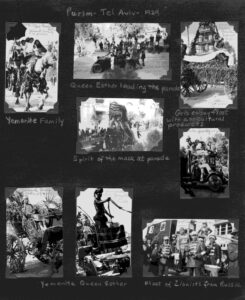