Revel Hosts International Conference on the Thought of Rabbi Joseph B. Soloveitchik Invitation to a Revel guest lecture and dinner on Thursday, October 25th

“Encountering Scripture in Overlapping Cultures: Early Jewish, Christian and Muslim Strategies of Reading and Their Contemporary Implications”—this is the title of an ongoing international research project spearheaded by Revel Associate Dean Mordechai Cohen, with the participation of fourteen distinguished scholars from the US, Israel and Europe.The initial phase of this project was a six-month seminar that Cohen directed with Hebrew University Prof. Meir M. Bar-Asher in the fall semester of 2010/11, during which all fourteen of the group members convened at the Institute for Advanced Studies (IAS) of the Hebrew University of Jerusalem. This group includes world experts on Jewish, Christian and Muslim interpretation of Sacred Scripture (the Hebrew Bible, the New Testament and the Qur’an), as well as its implications for religious law (halakhah, shari‘a) and legal hermeneutics, for literature and literary theory, and for the development of religious art. The group’s collaborative work, shared in weekly seminars, produced exciting comparative findings that illuminate similarities and differences among the three faith traditions.

For further details about the six-month seminar, including a full list of participants and their areas of scholarship, click here. 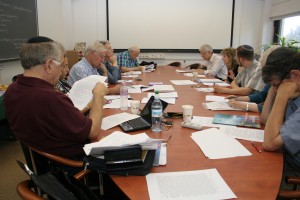 Upon the conclusion of their semester together in Jerusalem, the fourteen group members each committed to write a chapter for a new scholarly volume of collected studies that Cohen would edit together with Prof. Adele Berlin (University of Maryland), a world-renowned Bible scholar and another key group member. Since then, all of the chapters for the volume have been submitted, and are now undergoing editorial revision in order to highlight the nexus of ideas that emerge from this interdisciplinary project.

Revel Associate Dean Cohen returned recently from Israel where he re-convened the group for a conference at the Jerusalem IAS this past July. The purpose of this meeting was to harvest the fruits of the inter-disciplinary research that the members have been carrying out through correspondence over the past year. The conference consisted of five sessions with new presentations on subjects that emerged from a comparative reading of the chapter drafts submitted for the group volume.

Plans are underway to incorporate the insights produced by the conference into the revised chapters and editorial introductions of the group’s scholarly volume, thereby crystallizing its unified vision of the implications of the group’s interdisciplinary comparative study of Jewish, Christian and Muslim scriptural interpretation in relation to the humanities at large.
For more about this project, see https://blogs.yu.edu/revel/2011/08/31/a-multi-faith-approach-to-scripture/