by Michael Bettencourt for YUNews 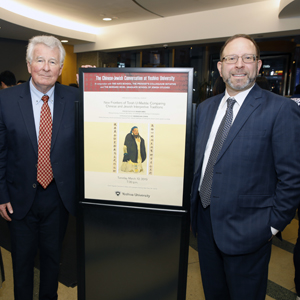 “The Chinese-Jewish Conversation” took an interesting turn on Tuesday, March 12, 2019, at an event held at the Israel Henry Beren Campus sponsored by the Bernard Revel Graduate School of Jewish Studies, the Katz School of Science and Health and the Provost’s Colloquium Initiative.

Dr. Roger Ames, a leading scholar of Confucian philosophy and the interpretations of classical texts from Peking University in China, delivered an invigorating lecture to over 100 attendees on Confucian role ethics and the multiple ways they differ from the worldview encompassed by Jewish and Christian theologies and Western philosophical principles.

In introducing Dr. Ames, Dr. Mordechai Cohen, professor of Bible, associate dean Bernard Revel School of Jewish Studies and divisional coordinator of academic Jewish studies, noted Yeshiva University’s longstanding tradition of “engaging the world around us through the rubric of Torah U-Madda [Jewish and general learning]” and emphasized the importance of “exploring the Chinese and Jewish traditions comparatively” as global networks and connections abound and the number of Chinese students at Yeshiva University expands. 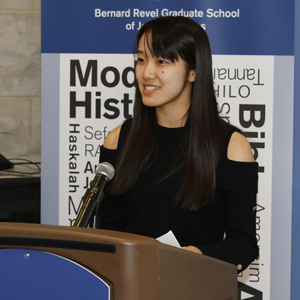 Representing Yeshiva’s Chinese student union, Shun Shang Guan from Wuhan in China spoke of her experiences at the Katz School of Science and Health, where she is studying quantitative economics after having earned a bachelor‘s degree in statistics from Zhong Nan University of Economics and Law in China. She expressed gratitude for “the opportunity to study at Yeshiva University, America’s famous Jewish university,” where she is able to “engage in the educational benefits and social learning common to Jewish culture and pursue the American experience.”

In “A Challenge to the Ideology of Individualism,” Dr. Ames began by stripping away the Christian overlay that generations of missionaries had used to make the writings of Confucius feel familiar to a religious audience that believed in a single divinity located in a place called heaven and who exercised control over the fates of human beings.

The reason for deleting this veneer, said Dr. Ames, is so that we can come to the texts in all their strangeness and originality and understand them in their Confucian context.

For example, one major difference between the Christian and Confucian views of life concerns the idea of a deity: “A capital H ‘Heaven’ gives us a concept of God where, in the Chinese tradition, there is no notion of a transcendent God, which is a different way of being religious that is not familiar to us.”

Another example concerns the idea of “the way,” which in Chinese is dao. The Christian notion of this comes from John 14:6: “I am the Way, and the Truth, and the Life.” In Christian religiousness, the path to salvation is already laid out, and the individual is obliged to follow that path to its expected end. 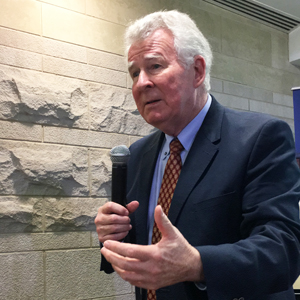 “Family” is one area where Western and Chinese traditions do overlap, but a major difference concerns the relationship between the family and the authority that establishes social order and governance. For Westerners, authority is grounded in laws derived from religious and secular principles external to the family, and the family follows these laws in carrying out the work of civilization.

For the Chinese, the social authority for achieving harmony through governance derives directly from family relations, from both the “cultural body” of the family, the repository of the values transmitted forward generation by generation—what Dr. Ames called “embodiment”—and the family’s physical bodies, whose interrelationships keep the cultural body whole and intact.

“Using family as the governing metaphor,” said Dr. Ames, “is really quite productive because it leads us, as one philosopher noted, to want to ‘family’ the world as the way to bring peace to our lives.”

“When we think of the concept of ‘person’ in this tradition,” continued Dr. Ames, “it’s holistic: the whole cosmos is in any one person, and we need the whole of the cosmos to explain one person. A human being is not a human being but a human ‘becoming’: a human is something that we do, a human is a process. The individuality of a person is not a starting point but an achievement, accomplished by virtue of the relationships cultivated with other people.”

Using linguistic terms, “Aristotle gave us a world of things, noun-centered. In the Chinese world, the idea of the gerund, that is to say, ‘human becoming,’ is fundamental. A human being is an event in history, a narrative. A human being is not something you can isolate and know; you have to know the narrative of where she comes from.” 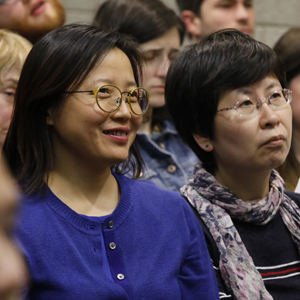 Understanding these texts on their own terms, then, leads to concepts about human individuality and the purpose of life that are quite different from those put forth through Judaism, Christianity and Western philosophy. Confucianism proposes an “atheistic religiousness, a family-centered religiousness, and you need a Chinese vocabulary to express it. We have to let this Confucian tradition have its own voice in order to appreciate the contribution it has to make to the modern world.”

What is that contribution? For Dr. Ames, the world in which we live is too often focused on winners and losers, on playing what he called “finite games.” The challenges presented by climate change are one example of humans playing finite games regarding resources and dominance.

To move toward playing “infinite games,” which are generative in nature and call for a continuous interplay of renewable resources, we need different concepts about what makes humans human and what constitutes a viable world order.

“Infinite games, which are the alternative to individualism, to winners and losers, is grounded in a relationally constituted gerundive concept of person,” he observed, “in achieving personal identity through embodiment, through living your roles and relationships. It’s not only through rationality that you find your way forward; we also need our feelings, we need our bodies, we need imagination, the ability to put yourself in somebody else’s position and figure out the best way to grow this relationship.” 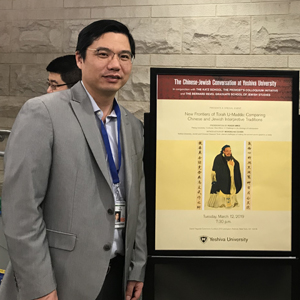 The increasing number of Chinese attendees at events sponsored by the Chinese-Jewish Conversation at YU indicates that the time has come for this vision. Quite a number of Chinese attendees—alumni of Beijing University—were invited by Dr. Henry Huang, associate professor of accounting at the Sy Syms School of Business. Dr. Huang, who is also president of the Beijing University Alumni Association of Greater New York, encapsulated the rationale for the conversation: “Jewish and Chinese cultures share common core values like family and education, and there is no better place than YU to host such a dialogue to bring the two communities closer.” 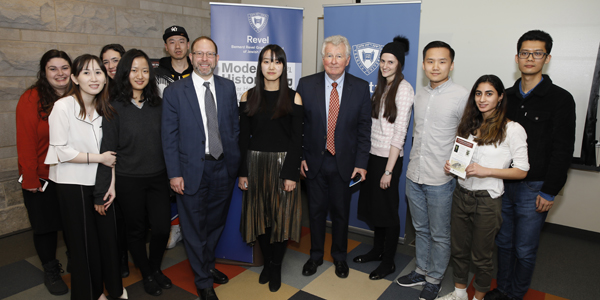 Dr. Mordechai Cohen, Ms. Shun Shang Guan and Dr. Roger Ames with students from the Katz School of Science and Health and Stern College for Women